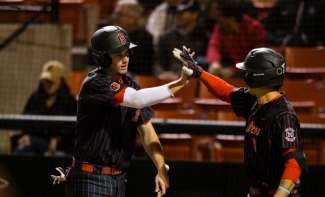 Verdon became the first Aztec to win MW Player of the Week this season and the second to win a weekly conference award after Garrett Hill earned Pitcher of the Week honors last week. Over SDSU's 3-1 week during a four-game road trip, Verdon went 8-for-17 with six doubles and nine RBI. Verdon showed a level of consistency over the road trip, having recorded at least two hits, one RBI and one extra-base hit in each of last week's four games.

Verdon began his week in a big way, hitting a go-ahead RBI double in SDSU's 9-3 win over San Diego. Verdon followed that with a career-high four RBIs in the team's series opener at Cal Poly to lead the way for a 9-7 win over the Mustangs.

The San Diego native slugged .824 for the week while owning a .500 on-base percentage.

Verdon's 11 doubles on the season rank fifth nationally and first in the Mountain West, while his 20 RBI sits as fourth most in the MW. Verdon also leads the Aztecs with 13 extra-base hits, a .574 slugging percentage, and 39 total bases, and is currently second on the team with a .338 batting average.