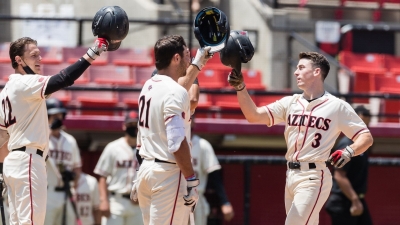 May 9, 2021 (San Diego) - San Diego State completed a weekend sweep of San José State on Sunday with an 8-3 victory in the series finale on Sunday at Tony Gwynn Stadium to highlight Senior Day festivities.

The Aztecs (25-12, 17-10 MW) scored all their runs in the sixth and seventh innings to claim their third series sweep of the season and maintain their lead by percentage points over Nevada (15-9 MW) in the Mountain West standings (.630 to .625).

The Wolf Pack were also 8-3 winners against UNLV at home on Sunday.

With its home schedule now complete, SDSU has nine conference road games remaining on its 2021 slate, while Nevada has seven league contests on deck, including four at home and three away.

After banging out a combined 25 hits in Saturday’s doubleheader, the Aztecs were limited to six hits against the Spartans (6-17, 2-8 MW) in the series finale.

However, the Scarlet and Black capitalized on four walks in the sixth by SJSU starter Jonathan Clark, scoring five runs on just two hits in the inning, while Poncho Ruiz smashed a three-run homer in the seventh to give the Aztecs some added breathing room.

Aaron Eden (3-0) notched his third victory of the season after tossing three scoreless innings, allowing just one hit and one walk to go with a pair of strikeouts in relief of Brian Leonhardt. Leonhardt pitched 3 1/3 innings to open the game, yielding two unearned runs on one hit and two walks against two strikeouts.

Seven Aztec pitchers gave up just two hits and combined for 11 strikeouts on the day, surpassing the double-digit plateau in the latter category for the entire series. SDSU is now 14-3 on the season when striking out 10 or more batters in a game.

San José State took advantage of a passed ball in the top of the fourth to build an early 2-0 lead. Ruben Ibarra, who drew a one-out walk, moved to second on a mishandled offering from Leonhardt before darting home on Charles McAdoo’s single up the middle. McAdoo advanced to second on the throw to the plate and later stole third before touching the plate on Ruben Mercado’s sacrifice fly.

Clark was seemingly in cruise control for the visitors, allowing one hit and one walk in the first five innings while retiring seven straight batters before running out of gas in the sixth.

Orr and Caden Miller each drew a base on balls to open the frame and promptly executed a double steal before Matt Rudick was intentionally walked to load the bases. Moments later, Ruiz walked in SDSU’s first run of the game, bringing home Orr, while Leonhardt’s sacrifice fly knocked in Miller. Shortly thereafter, Jaden Fein walked and advanced to second on a wild pitch, as Rudick darted home, while Ruiz and Fein quickly scored on Cruce’s clutch two-run single through the right side on a 1-2 offering.

The Aztecs extended their lead to 8-2 in the seventh when Ruiz launched his third homer of the year, a three-run blast over the fence in left-center field on an 0-2 pitch with two outs. Previously, Miller reached on a fielder’s choice, while Mike Jarvis laced a single to left.

SJSU threatened in the ninth but managed to score just one run on a wild pitch. With the bases loaded and the tying run on deck, Kelena Sauer took to the hill and caught Ibarra looking at a called third strike to secure his first collegiate save.

San Diego State will travel to Sin City next weekend to battle UNLV in a three-game series May 15-16.