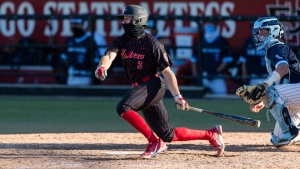 February 26, 2021 (San Diego) - San Diego State erupted for seven runs in the bottom of the seventh on Friday to highlight a 10-4 victory over UC San Diego in the first game of a weekend series at Tony Gwynn Stadium.

The Aztecs finished with 12 hits and capitalized on six errors to raise their record to 3-1and spoil the Tritons’ NCAA Division I debut in baseball.

The Aztecs found themselves on the wrong side of a 4-0 score after UCSD’s Anthony Lucchetti smacked a three-run homer in the third, while Tate Soderstrom followed with a solo shot to lead off the fourth. Triton starter Cameron Leonard kept SDSU off the scoreboard through five complete innings before the host school began clawing back into contention in the sixth.

At that juncture, Matt Rudick led off with a walk, stole second and advanced to third on Wyatt Hendrie’s single. Moments later, Leonard was pulled in favor of Michael Mitchell after Cruce plated Rudick with a base hit through the right side. Hendrie touched the plate shortly thereafter on Fein’s sacrifice fly. Ryan Orr subsequently reached on a fielder’s choice and stole second, with Cruce racing home on the catcher’s errant throw to the bag.

Trailing 4-3, the Aztecs sent 12 batters to the plate in the seventh, notched seven runs on seven hits and two errors to completely turn the momentum in their favor.

Carrigg scored on a wild pitch, while Miller sprinted home on Cruce’s grounder to second that put the Scarlet and Black in front for good.

With two outs, the flood gates opened against UCSD, as Rudick scored on another wild pitch, while Fein, Leonhardt, Carrigg and Miller followed with RBI singles, putting the Scarlet and Black in command.

Despite four walks, reliever Christian Winston (1-0) picked up his first victory of the season on the strength of three scoreless innings without a hit, adding three strikeouts after entering for Troy Melton with two outs in the fifth. Ricky Tibbett came in to get the final four outs, allowing just one hit in his appearance.

Melton fanned seven in his second start of the season but yielded all four Triton runs on three hits in 4 2/3 innings of work. Conversely, Mitchell (0-1) was tagged with the loss, giving up seven runs (one earned) on seven runs and seven hits and one walk.

After Melton’s exit, pinch hitter Jackson Kritsch was the lone UCSD player to record a hit, an infield single deep in the hole at shortstop in the ninth.

The Aztecs and Tritons resume their series on Saturday at Tony Gwynn Stadium starting at 1 p.m. SDSU is slated to start Kohl Simas (0-0), while Chris Gilmartin (0-0) is expected to get the call for UCSD.