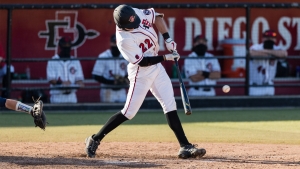 February 20, 2021 (San Diego) -  San Diego State’s Mike Jarvis scored on a wild pitch in the bottom of the 10th inning on Saturday to give the Aztecs a wild 19-18 victory over San Diego in a game that last nearly five hours at Tony Gwynn Stadium.

SDSU (2-0) trailed 17-12 in the bottom of the seventh but quickly closed the gap on a pair of two-run singles by Jacob Cruce and Jaden Fein.

Jarvis and Matt Rudick opened the inning with a pair of hits, while Wyatt Hendrie was struck by a pitch to load the bases. Cruce then singled through the right side, plating Jarvis and Rudick. After a wild pitch, Fein followed with a hot smash off the glove of Torero first baseman Shane McGuire, which rolled through the infield, allowing Hendrie and Cruce to race home.

USD (0-2) gave itself some breathing room in the eighth when Cody Jefferis drove in Caleb Ricketts with an RBI single, extending the visitors’ advantage to 18-16.

However, the Aztecs fought back in their half of the frame when Brian Leonhardt looped a two-run single to left, scoring Hendrie and Cruce. Earlier, Hendrie was hit by another pitch, but stayed in the game, as Cruce followed with a double to right.

Neither side scored in the ninth, but the Toreros had a chance in the top of the 10th with the international tiebreaker rule in effect for the 2021 college baseball season. McGuire was placed on second and later advanced on Ricketts’ flyout to right.

Moments later, USD appeared to attempt a squeeze play, but McGuire was tagged out at the plate after a rundown, while the hitter Peter Abinanti struck out looking on the next pitch to end the threat.

Then in the bottom of the inning, the Aztecs placed Jarvis on second, while Hendrie was intentionally walked before getting forced out at second on a grounder by Cruce. The Toreros changed pitchers at this juncture, with Jack Dolak taking over for Eddy Pelc, but the move backfired when Dolak uncorked a wild pitched, allowing Jarvis to race home with the winning run and put an end to the marathon thriller.

SDSU’s sixth pitcher of the day, Tre Brown, picked up the win after tossing 2 1/3 scoreless innings, yielding just two walks and no hits, while Pelc was tagged with the hard-luck loss.

Both teams utilized six pitchers; however, the highly anticipated duel between USD’s Carter Rustad and the Aztecs’ Kohl Simas never materialized, as both starters witnessed early exits. Rustad allowed nine runs (six earned) on just five hits and three walks in 1 1/3 innings, while Simas, who pitched against his former teammates, was pulled after 1 2/3 innings, giving up five runs (four earned) on four hits and three walks to go with a pair of strikeouts.

Offensively, Fein led the Scarlet and Black with three hits and four RBIs, while Leonhardt and Caden Miller got into the act with two hits and a trio of RBIs apiece.

Not to be outdone, Hendrie scored a career-high four runs, while Cruce, Rudick, Jarvis and Cole Carrigg all touched the plate on three occasions.

USD raced to an early 5-2 lead, but the Aztecs stormed back with eight runs in the second after sending 12 batters to plate. The key hits for SDSU in the frame, included a Jarvis solo homer, Hendrie’s RBI triple and Caden Miller’s two-run double.

The Aztecs’ 10-5 advantage quickly evaporated, however, as the Toreros exploded for nine runs in their next turn at-bat, highlighted by Adam Lopez’s grand slam.  Shortly thereafter, Thomas Luevano hit a two-run blast to give the visitors a sudden 14-10 bulge.

SDSU got two runs back in the fourth when Leonhardt scored on a wild pitch, while Miller drove in Carrigg with an RBI single to center.

However, USD extended the margin to 17-12 with run-scoring singles by Lopez and Will Worthington in the fifth, while Luevano crossed the plate on a throwing error in the seventh.

Luevano and Ricketts led the Toreros with three hits apiece, while Lopez finished with five RBIs in the loss.

The series shifts to USD’s Fowler Park for Sunday’s finale, which gets underway at 2 p.m. Michael Paredes is scheduled to start for the Aztecs, while the Toreros are expected to counter with Grady Miller.