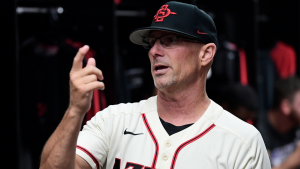 Aztecs will face five opponents who made the NCAA tournament

September 16, 2019 (San Diego) - SDSU baseball head Coach Mark Martinez has released the Aztecs’ 2020 schedule. The 2020 slate includes 36 home games and five opponents who made the NCAA Tournament in 2019. Additionally, Tony Gwynn Stadium will be the site of the Mountain West Championships for the second time in the last three years.

The Aztecs have two fall games scheduled in 2019. They play at California Baptist October 26 at 1 p.m. and host CSUN November 3 for another 1 p.m. start.

SDSU begins the season in Conway, S.C. where they will play in a tournament (Feb. 14-16) hosted by Coastal Carolina, the 2016 national champions. The Aztecs will play Virginia Tech (Feb. 14), Coastal Carolina (Feb. 15) and UNC Greensboro (Feb. 16).

The Aztecs will then host Long Beach State (March 3) before heading to Norman, Okla. for a three-game series against Oklahoma (March 6-8).

SDSU then plays 16 of their next 17 home games at Tony Gwynn Stadium. They host TCU, a 2019 postseason team, on March 10 and then welcome New Mexico State to town for a three-game series (March 13-15).

After a Tuesday game (March 17) at LMU, another postseason team from a year ago, SDSU hosts Cal Poly (March 21-23) and crosstown for San Diego (March 24).

The Aztecs will then play host to a unique non-bracketed tournament against Mountain West schools that will be considered non-conference games. SDSU will play San Jose State (March 27), Fresno State (March 28) and UNLV (March 29) at 6 p.m. with the other two teams squaring off a 1 p.m. the same day.

SDSU plays at Cal State Fullerton April 7 then heads to Boise State (April 9-11), who revived their baseball program after discontinuing it in 1980.

SDSU is looking to reach its sixth NCAA tournament in the last eight years. NCAA Regional play will run from May 29 – June 1. Super Regionals are held from June 5-7, with the College World Series running from June 13 – 24 in Omaha, Neb.