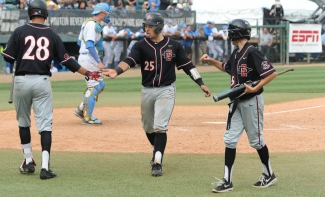 June 4, 2017 (Long Beach) - A San Diego State baseball season that produced 42 victories (tied for the most for the program in the last 15 seasons), a fourth Mountain West Conference tournament title in the last five seasons and advanced to an NCAA Regional for the fourth time in five years has ended.

The Aztecs, the four-seed in the region, got a two-run homer from senior Danny Sheehan in the first inning but fell behind and was unable to complete a late-inning rally, losing to ninth-ranked and region top-seed Long Beach State, 7-4. The loss ends San Diego State’s season on the third day of the Long Beach Regional, with a final record of 42-21.

Sheehan’s seventh homer of the season, a towering shot that easily cleared the left field fence came on the heels of a Chase Calabuig single to put the Aztecs up 2-0. Remarkably, that was the first extra base hit of the event for the Aztecs, snapping a streak of 26 innings without an extra base hit.

“We didn’t get ahead the first couple games and it felt good just to get ahead for once and really jump on them early,” Sheehan said.

Long Beach State used a double, a single and two hit batsmen to draw even in the second inning.

The Dirtbags took the lead for good in the third frame, capitalizing on an uncharacteristic defensive lapse by San Diego State. SDSU, which entered the contest with the 16th highest fielding percentage in the nation was victimized by three infield errors in the inning. A throwing error at shortstop, a fielding error at third base and an errant throw at first base on a pickoff attempt did in the Aztecs, which had committed just 50 errors in 62 previous games.

“We were our own worst enemy today,” Martinez said. “We are one of the best fielding teams in the country and it is uncharacteristic of our infield. They have been solid all year long. We couldn’t overcome some big mistakes and could not respond from that.”

David Banuelos singled up the middle, the only hit in the Dirtbags' third inning, to score Luke Rasmussen to put Long Beach State up, 4-2.

Trailing 5-2, San Diego State put together its most sustained offensive production of the regional. Following a leadoff walk, sophomore Dean Nevarez singled to put runners on the corners. Junior Tyler Adkison singled to right, scoring Andrew Martinez and SDSU was within two.

One out later, Alan Trejo singled through the right side of the infield, driving home Nevarez and the Aztecs trailed 5-4, with one out and runners on first and second. However, the rally ended on a strikeout and a runner caught stealing.

The Dirtbags tacked on a pair of insurance runs in the ninth to provide the final score.

Despite the ending, Martinez took plenty of positives to take away from a season in which San Diego State doubled its win total from last season and claimed its 27th conference title in program history.

“I am honored to be part of this program and coach these young men,” Martinez said. “It is quite a turnaround for a program that had a bad year last year. It is a testament to our guys committing to a culture and an ideal that we put in from of them. We changed 180 degrees and the record reflects that. They bought in to what we wanted to do.”