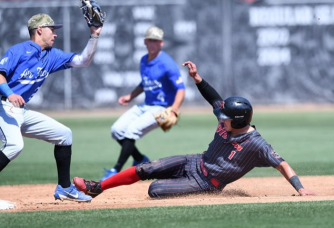 Air Force used a pair of homers and an Ashton Easly RBI single in the game's first two innings to take an early 4-0 lead. Starting in the third inning, however, Justin Goossen-Brown settled in nicely, allowing just one hit over his next seven innings pitched and at one point, retiring 15 consecutive batters before allowing a leadoff walk in the top of the eighth.

Goossen-Brown finished the day with 8.2 innings pitched -- the longest outing by an Aztec this season -- with six hits, four earned runs, two walks, and eight strikeouts. Christian Winston came in of relief of Goossen-Brown, who finished his outing with 116 pitches, and struck out the only batter he faced.

While Goossen-Brown held the Falcons at bay, the Aztecs put together a two-run sixth inning with a Casey Schmitt RBI double, scoring Matt Rudick, and an infield single by Angelo Armenta to score Schmitt.

The Aztecs brought the tying run to the plate with one out in the ninth after Jaden Fein recorded a one-out double and David Alamillo drew a four-pitch walk. Falcons reliever Nathan Price was able to force pinch hitter Jacob Cruce to fly out to deep center before Rudick flew out to left to end the game.

Rudick and Fein led the Aztec lineup with two hits each.

A go-ahead RBI double by Mike Jarvis and a 2-RBI triple by Matt Rudick highlighted a game-clinching three-run eighth inning in a 6-3 win for SDSU in the nightcap. Air Force, which tied the game at 3-3 in the top of the eighth with a Rob Dau RBI single, was held to just three hits - the lowest hit total posted by the Aztec pitching staff this season.

Paredes allowed a Tommy Gillman solo home run in the top of the first, but settled in and did not allow a hit for his remaining six innings. After recording a frame-opening strikeout in the seventh, Paredes ran into some control issues, walking the next two batters he faced before SDSU made the move to the bullpen.

A bases-loaded walk allowed Air Force to cut the lead to 3-2 in the seventh, but Adrian Mardueno, who inherited a bases-loaded situation and a 2-0 count, fought back and stranded all three inherited runners to preserve the one-run Aztec lead.

Mardueno earned the win on the mound for SDSU, throwing 2.1 innings with two hits, one run, no walks, and five strikeouts. With his seventh-inning effort, Mardueno has stranded 12 of the last 13 runners he has inherited.

From the top of the order, Matt Rudick reached base in all five of his plate appearances, drawing a pair of walks while going 3-for-3 with a triple and two RBIs. Chad Bible also recorded a three-hit performance, going 3-for-4 with a run scored, while Jaden Fein and Angelo Armenta went 2-for-4 and 2-for-5, respectively. Fein drove in two of SDSU's first three runs, recording an RBI triple in the first before singling to right center in the third to score Rudick.

SDSU goes for a series win tomorrow afternoon, hosting Air Force for the series finale at 1:00 p.m. The game will be aired on the Mountain West Network.