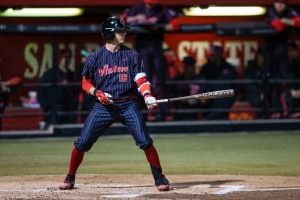 March 23, 2019 (Albuquerque) - All nine players in the San Diego State starting lineup recorded either multiple hits or drove in multiple runs as the Aztecs posted a season-high 19 runs and 20 hits in a 19-3 drubbing of New Mexico on Saturday afternoon at Santa Ana Star Field. The Aztecs, now winners of eight of their last 10, improve to 13-8 (4-2 Mountain West) on the year while New Mexico falls to 11-11 (3-5 MW).

Joe Fitzhugh led the Aztecs offensively, going 4-for-6 with a double and a home run to lead SDSU with four hits, two extra-base hits, four RBIs, and four runs scored. Fitzhugh established new career-bests in all four of those categories in today's win.

Jaden Fein also posted four hits in a 4-for-4 day at the plate, scoring three runs while driving in three and coming just a home run short of the cycle.

The Aztecs scored in each of the game's first six innings, including a six-run sixth inning that pushed SDSU's lead to 15-2 and featured a two-run RBI single by Fitzhugh, a bases-clearing three-RBI triple by Fein, and a Matt Rudick sacrifice fly.

SDSU put up another crooked number in the eighth, posting four runs after Julian Escobedo drew a bases-loaded walk, and Angelo Armenta drove in a pair on two-RBI single before later scoring on a wild pitch.

Justin Goossen-Brown used 108 pitches over his seven-inning start, keeping the Lobos to just three runs on nine hits while striking out three and walking two. Daniel Ritcheson recorded the final six outs, keeping the Lobos hitless over the eighth and ninth innings. Goossen-Brown maintained his perfect record with his effort, improving to 3-0 on the season.

Chad Bible hit his team-leading third home run of the season in the third, smacking a two-run blast over the left-field wall to extend SDSU's early lead to 5-0.

The Aztecs tagged Lobo starter Nathaniel Garley, who entered today with a perfect 4-0 record, for seven runs on nine hits over 3.2 innings pitched.

San Diego State looks to finish off a sweep of New Mexico tomorrow at 1 p.m. MT/noon PT.  Casey Schmitt is scheduled to start for the Aztecs in the series finale.