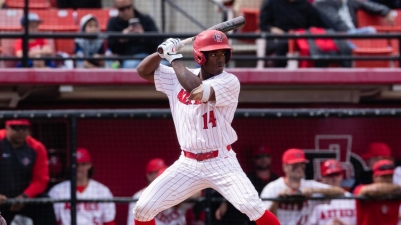 May 5, 2022 (San Diego) - For the second straight night, San Diego State was unable to overcome an early deficit, as visiting CSUN claimed a 9-2 decision over the Aztecs on Wednesday at Tony Gwynn Stadium.

Despite a narrow 10-9 deficiency in hits, the Aztecs (14-33) were plagued by five errors, which led to four unearned for the Matadors (23-19), who raced to a 6-0 lead after the first two innings and did not look back.

The top four hitters in CSUN’s lineup did most of the damage, batting a combined .412 (7-17) with five RBIs and six runs scored, including designated hitter Kevin Fitzer, who drove in four runs himself with a 2-for-4 effort at the plate, while Ali Camarillo and Kai Moody finished with two hits as well.  In addition, Moody scored two runs along with Andrew Sojka (1-3), who also drew a pair of walks.
Conversely, Irvin Weems led the SDSU offense with a 2-for-4 performance, highlighted by his third home run of the season—a solo shot in the third—to go with an RBI double in the seventh, while Shaun Montoya totaled two hits of his own.
Fitzer put the visitors on the board in the first with a two-run double, plating Sojka and Moody, who earlier walked and singled, respectively.
The Matadors tacked on four markers in the second on three hits, two walks, one error and a wild pitcher. CSUN loaded the bases with one out after Brandon Bohning drew a walk, while Sojka and Camarillo followed with consecutive singles.
Moments later, Moody hit a grounder to short, but the relay to second was dropped, allowing Bohning to touch the plate. With the sacks still full, Fitzer drew a base-on-balls to bring in Sojka, prompting a pitching change, as Avery Jones took over for starter Omar Serrano. However, Camarillo raced home on Bart West’s single to center, while Moody subsequently scored on a wild pitch.
Weems put the Scarlet and Black on the board in the third, crushing a 1-0 offering from reliever Blake Sodersten over the fence in left center.
Despite surrendering the long ball, Sodersten (5-5) picked up the victory after taking over for starter Gavin Lizik, who countered two hits with three strikeouts in two scoreless innings. Sodersten took the hill and fanned out seven batters over the next four frames, offsetting four hits and a walk before giving way to the trio of Elias Jauregui, Xavier Martinez and Blake Schriever, who each allowed a hit in their own one-inning stints.
Jauregui gave up Weems’ RBI double in the seventh, which brought home Max Foxcroft, who previously reached on a throwing error with two outs.
In the interim, CSUN added a run in the fourth when Camarillo hit a leadoff single to right center and advanced to third on Moody’s double before crossing the plate on Fitzer’s grounder to first.
The Matadors tacked on two more tallies in the sixth when Nathan Barraza scored from third following a failed pickoff attempt at first, while Drew Porter scored on a wild pitch.
SDSU stranded two runners in both the second and fifth but came up empty after Lizik and Sodersten extinguished the respective threats with inning-ending groundouts.
The Aztecs utilized six pitchers on the night, including the trio of Ricky Tibbett, Jonny Guzman and Kelena Sauer, who retired the side in order during their respective one-inning appearances to close out the game. Jones struck out three in 3 2/3 innings after taking over for Serrano (0-3), who lasted just 1 1/3 innings, allowing six runs (four earned) on five hits and three walks.
Box