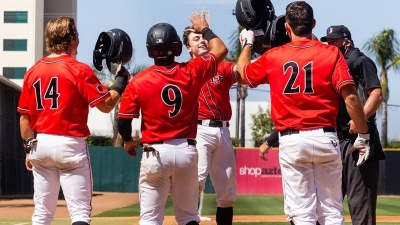 April 24, 2021 (San Diego) - San Diego State recorded two walk-off victories in a non-conference doubleheader against Dixie State on Saturday, posting an 8-7 triumph in the opener before claiming a narrow 5-4 decision in 10 innings in the nightcap at Tony Gwynn Stadium.

With the results, the Aztecs clinched their ninth series victory in 10 weeks this season, improving to 21-9 overall, while the Trailblazers slip to 11-25 on the year.

It wasn’t easy, however, as SDSU had to withstand a power surge from Dixie State, which clubbed six solo home runs in the twin bill, including four alone by Jake Engel.

Despite the deep shots, the Aztecs received timely hitting when it mattered the most, as pinch runner Matt Rudick scored on Brian Leonhardt’s sacrifice fly in the bottom of the ninth to provide the winning margin in game one, while Wyatt Hendrie singled home Caden Miller from third in the 10th inning of game two with the international tiebreaker in effect.

In addition, SDSU pitchers combined for 28 strikeouts in the twin bill, including a season-high 15 in the opener.

Game one starter Troy Melton tied his career high with nine strikeouts in 5 1/3 innings but four of his five allowed were home runs, including three by Engel and another by Caden Spurlin, as Dixie State rallied with four markers in the sixth to take a 7-6 lead.

With SDSU maintaining a 6-3 advantage in the top of the sixth, Engel launched his third homer of the game with one out, while Lane Pritchard followed with single through the right side to chase Melton. Aaron Eden took the mound at this juncture and induced a flyout before throwing wildly to first on a failed pick-off attempt.

However, Jarvis made up for his miscue in a big way in the bottom of the frame, blasting a solo home run to left with two outs that knotted the score at 7-7.

Dixie State put two runners aboard on a single and a walk, but Sauer got out of the jam by striking out Kaden Hollow and inducing a double-play grounder to Jake Schultz.

The score remained unchanged until the ninth when Poncho Ruiz drew a one-out walk, while pinch runner Rudick quickly advanced to third on an unsuccessful pick-off attempt by Trailblazer reliever Jack Gonzales, whose throw got past Engel at first. Shortly thereafter, Leonhardt lifted a fly ball to the left field foul territory on a 3-2 pitch, as Rudick tagged up and beat the throw home with the game winner, as the Aztec bench rushed the field in jubilation.

Christian Winston (2-1) pitched a scoreless eighth and ninth for the Scarlet and Black, allowing just one walk against four strikeouts to earn the victory, while Gonzales (1-4) took the loss. Dixie State starter Dillon Holliday went five innings, yielding six runs (two earned) on five hits and one walk but struck out just one batter.

Hendrie was the lone Aztec to finish with two hits, while TJ Fondtain cracked a key two-run double in the fifth when SDSU plated five runs on three hits, capitalizing on a pair of Trailblazer errors.  Jaden Fein, who entered the weekend as the national leader in batting average, also contributed an RBI double in that inning, while Leonhardt reached on a fielding error, which brought in Fondtain.

In the nightcap, the Aztecs found themselves in pursuit mode for much of the game, as Dixie State built a 4-0 advantage on a pair of unearned runs in the second, while Fisher and Engel went yard in the third and fifth, respectively.

SDSU finally ended its scoring drought in the fifth when Cole Carrigg scored on a throwing error by Trailblazer catcher Tanner Harper, whose throw down to second on a stolen base ricocheted off a sliding Miller. Previously, Carrigg walked, stole second and advanced on a fielder’s choice.

Later in the seventh, Miller came through with a key two-run triple on a 1-2 pitch, driving in Carrigg and Fisher Pyatt, who drew consecutive walks. After a strikeout, Ruiz soon followed with a sacrifice fly to left, which plated Miller and tied the score at 4-4.

Both teams put a runner aboard in the ninth but were unable to score, as the contest moved to extra innings.

With the international tiebreaker in effect, Aztec reliever Tre Brown kept the Trailblazers off the board by inducing a fly ball followed by a pair of strikeouts.

Next it was the Aztecs’ turn to try and push across a run and they delivered once again in the clutch. After Miller was placed on second, Jarvis was intentionally walked, with both runners moving up on pinch hitter Max Foxcroft’s sacrifice bunt. With one out and first base open, Dixie State chose to pitch to Hendrie, who laced a single through middle on the second offering from reliever Brayden Bonner, as Miller raced home to give the Scarlet and Black another come-from-behind victory.

SDSU is now 4-0 in extra-inning games this season and 5-1 in one-run decisions.

Three Aztec pitchers combined for 13 strikeouts, including five by Brown (5-1), who picked up his team-leading fifth victory of the year after allowing one hit in three scoreless innings.

Leonhardt pitched the first two frames, giving up two unearned runs on one and three walks against a trio of strikeouts, while Michael Paredes entered for the next five innings, yielding two runs on four hits and no walks with six strikeouts of his own.

On the flip side, Bonner (2-2) was tagged with the loss after pitching 2 1/3 innings, including the fateful 10th. Jimmy Borzone started for the Trailblazers, allowing three runs on two hits and four walks in six innings of work before giving way to Brett Porthan to start the seventh.

The two teams close out their weekend series with a single game on Sunday starting at noon.