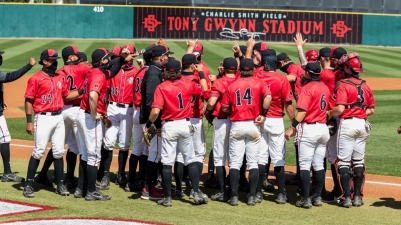 April 2, 2021 (San Diego) - In a recurring theme of the 2021 season, San Diego State once again displayed its resiliency on Friday, posting a pair of walk-off victories against New Mexico at Tony Gwynn Stadium, winning the opener in a 10-9 thriller before completing the sweep with a 5-4 extra-inning triumph in the nightcap.

With the results, the Aztecs move to 15-6 on the season and 10-4 in the Mountain West while giving Mark Martinez the 200th victory of his head coaching career. Conversely, the Lobos slip to 8-13 overall and 6-8 in conference play.

In game one, pinch hitter TJ Fondtain singled home Jaden Fein and Cole Carrigg to cap a six-run rally in the bottom of the ninth after SDSU trailed 9-4. Meanwhile, reigning Mountain West Player of the Week Mike Jarvis was the hero in the nightcap, driving in Ryan Orr in the 10th with the conference’s tiebreaker rule in effect.

The Aztecs tied their season-high with 19 hits in the opener, as six batters finished with two or more for the game. Jarvis logged a 4-for-5 effort, while Matt Rudick (2 RBIs) and Wyatt Hendrie totaled three apiece. Fein (2 RBIs), Orr and Jacob Cruce also got into the act with two hits each.

The prospects for victory appeared bleak after SDSU left the bases loaded in the seventh before UNM retired the Scarlet and Black in order in the eighth to maintain its 9-4 advantage.

However, Jarvis sparked the Aztecs’ rally in the ninth, leading off with a triple before scoring on Rudick’s ensuing RBI single. After Hendrie smacked a base hit to chase UNM reliever Riley Egloff, new pitcher Terrel Hudson issued a walk to Brian Leonhardt, while Fein followed with a two-run single, cutting the deficit to 9-7. Cruce then laced a single to left, which loaded the bases and spelled the end of Hudson’s brief appearance.

Next up was Orr, who knocked in Leonhardt with a single to left; Carrigg entered as a pinch runner for Cruce at second, while Fondtain stepped up to the plate as a pinch hitter for Fisher Pyatt. On an 0-2 offering, Fondtain delivered a two-run single, as Fein and Carrigg raced home, setting off a jubilant celebration on the field.

SDSU did not make a single out in the inning, totaling six runs on seven hits and one walk to complete the dramatic comeback.

The Aztecs’ third pitcher of the game Aaron Eden (1-0) pocketed his first win of the season after tossing two scoreless innings in which he allowed just one walk against a pair of strikeouts. On the flip side, Hudson (0-3) absorbed the loss after yielding SDSU’s final three runs.

Aztec starter Michael Paredes was tagged for seven runs on seven hits with no walks and four strikeouts before giving way to Leonhardt, who took the hill with two outs in the sixth.

Trailing 3-2, the Lobos used the long ball to vault front in the fourth, as Harry Fullerton hit a solo shot, while Jarrett Gonzales followed with a three-run blast to give the visitors a 6-3 bulge.

SDSU narrowed the gap in the bottom of the frame on Rudick’s two-out single that plated Orr. However, UNM responded with a run in the sixth when Kyle Landers, who led off with a base hit and advanced on a deep flyout to center, raced home on Lance Russell’s RBI single to right.

The Lobos added two more markers in the seventh when Fullerton singled to left, scoring Connor Mang and Mack Chambers. In perhaps an unsung key play, Kyler Castillo was gunned down by an alert Hendrie after trying to advance to third on the throw home to end the inning.

UNM starter Nathaniel Garley lasted 5 1/3 innings, allowing four runs on 11 hits and one walk and no strikeouts before yielding to Miguel Reyes Jr.

In the nightcap, the Aztecs maintained a 4-1 lead in the seventh when the Lobos cut the margin to one on Cole Posey’s two-run single that brought in Landers and Jared Martin, who previous reached on a walk and fielder’s choice respectively.

UNM soon tied the game with an unearned run in the eighth when Chambers reached on a infield single, advancing on a wild pitch before racing home on an error following his steal of third.

With a 4-4 deadlock on the scoreboard, the contest moved into extra innings where the conference’s tiebreaker rule went into effect. The Lobos got a runner to third; however, SDSU reliever Tre Brown induced a harmless grounder to short before striking out Adam Schneider to end the threat.

In the Aztecs half of the frame, after Orr was placed on second, pinch hitter Max Foxcroft drew a walk off UNM reliever Cody Dye, while Caden Miller reached on a bunt single to load the bases. Jarvis then stepped up a smacked a sharp grounder through the left side as Orr galloped home with the game winner.

Brown improved to 3-1 on the year after pitching 2 2/3 scoreless innings, allowing just one walk. SDSU starter Troy Melton gave up three runs (two earned) on three hits and two walks against eight strikeouts before yielding to Seth Urbon to start the eighth. On the flip side, Dye (1-1) suffered the loss for the Lobos.

The Aztecs plated three runs in the fourth when Fein drove in Hendrie with an RBI double, while Cruce brought home Leonhardt with a sacrifice fly. Fein advanced to third on the play and score on a wild pitch shortly thereafter.

The teams traded runs in the fifth, with Miller scoring on Rudick’s sacrifice fly to give the host school a 4-1 advantage.

Miller and Jarvis had two hits apiece to lead the Scarlet and Black in game two, while Chambers finished with a pair of hits for the UNM in the loss.

San Diego State closes out its series vs. New Mexico with a single game on Saturday, beginning at 1 p.m.