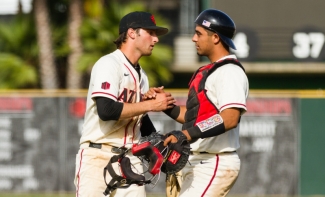 Harrison Pyatt continued his red-hot April performance, posting five shutout innings with only three hits allowed while striking out a career-high eight. After posting a hitless first and second inning, Pyatt scattered three Bulldog hits over the next three innings, never allowing much of a scoring opportunity until loading the bases with one out in the fifth. Pyatt maneuvered his way out of the jam, however, logging his seventh and eighth strikeouts of the night against Fresno State's Zach Ashford and Nolan Dempsey, who hit No. 1 and No. 2 in the Bulldog lineup, respectively.

The Aztecs broke a scoreless tie on the first pitch of the bottom of the sixth, as Dean Nevarez sent a no-doubter over the wall in left field for his fourth home run of the season.

Fresno State responded with a pair of runs in the sixth, using a pair of errors on sacrifice bunt attempts to take a 2-1 lead. The Aztecs responded with its own pair of runs in the home half of the inning, as Nevarez logged an RBI single to score Matt Rudick before Julian Escobedo supplied the Aztecs with a 3-2 lead after driving in Jordan Verdon on an RBI single of his own in the next at-bat.

SDSU then turned to Casey Schmitt, who retired six of the seven batters he faced in the eighth and ninth innings with four strikeouts to earn his fifth save of the season.