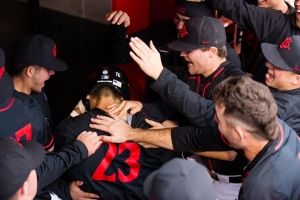 March 12, 2019 (Northridge) - Behind multi-RBI performance by Chad Bible and Julian Escobedo, the San Diego State baseball team scored a season-high 11 runs in an 11-5 win over CSUN at Matador Field on Tuesday afternoon. The Aztecs jump above .500 at 8-7, while the Matadors fall to 9-8 on the year.

Facing an early 1-0 hole, Bible gave SDSU its first lead of the game with his second home run of the year -- a two-run blast to center field -- in the top of the fourth inning.

SDSU continued to apply the pressure in the middle innings, scoring a pair in the fifth with a Julian Escobedo two-RBI double before scoring three in the sixth. Ryan Orr brought home Brian Leonhardt with a sacrifice fly to center just before Casey Schmitt drove in Jaden Fein on a triple to right center after battling in a 10-pitch at bat. Schmitt later capped the three-run sixth after scoring on a wild pitch to give SDSU a 7-2 lead.

Bible logged his second extra-base hit of the day in the seventh, doubling home Julian Escobedo to extend the lead to 8-2.

CSUN collected three runs over the seventh and eighth to cut the Aztec lead to 8-5, but SDSU responded with a trio of runs in the ninth including sacrifice flies by both Chad Bible and Brian Leonhardt.

The Aztecs used eight different pitchers in the win, including Adrian Mardueno who earned the win after posting a hitless sixth inning. Starter Justin Goossen-Brown allowed just one base runner over his two innings of work, finishing with a line of no hits, no runs, one walk, and two strikeouts.

SDSU continues non-conference play this weekend, returning home to host Seattle U (4-11) for a three-game series beginning Friday at 6:00 p.m