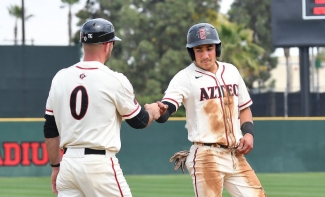 For the second consecutive game, SDSU jumped out to a 3-0 lead in the top of the first inning. The Aztecs capitalized on a two-out error by New Mexico left fielder Derek Marshall, as the miscue opened the door for Julian Escobedo's two-RBI double that plated Granite Hills alum Jordan Verdon and Dean Nevarez.

After New Mexico responded with a two-run third inning, SDSU extended its lead to 4-2 in the ensuing frame, as Casey Schmitt hit a sacrifice fly to right to score Escobedo.

The two-run third inning was SDSU starter Jorge Fernandez's one of few blemishes on the afternoon, as the senior right-hander was one out shy of his third consecutive quality start, pitching 5.2 innings with three runs and seven hits allowed.

Fernandez allowed a two-out RBI single to UNM's Dan Herrera to cut the Aztec lead to 4-3. SDSU then turned towards Garrett Hill, who was making his first career relief appearance and left a pair of runners stranded, including the potential game-tying run at third base.

Schmitt took over on the hill for a six-out save opportunity in the bottom of the eighth. Schmitt worked around a leadoff single by Derek Marshall, who eventually ended up at third base after a pair of groundouts. Schmitt ended the threat and continued the late-inning trend of stranding runners in scoring position after inducing a Garrett Goldsmith groundout to end the inning.

The Aztecs came through with a trio of insurance runs -- all with two outs -- in the top of the ninth. Jacob Maekawa, who doubled to start the inning, traded places with Chase Calabuig after he ripped a ground-rule double over the wall in left-center field. Two pitches later, Jordan Verdon singled up the middle to bring home Calabuig and to cap the ninth-inning scoring, Escobedo posted his fourth hit of the day after singling through the right side of the infield to score Verdon.

Schmitt recorded his ninth save of the season after posting a scoreless ninth inning.

Escobedo led the SDSU lineup, posting a career-high four hits in a 4-for-4 performance with three RBIs. Chase Calabuig and Dean Nevarez also had strong showings at the plate, going 3-for-5 and 2-for-4, respectively.

SDSU is back in action next weekend, hosting San Jose State for a four-game series beginning Friday at 6:00 p.m. SDSU and SJSU will play a doubleheader on Saturday beginning at 1:00, making up a game that was postponed in San Jose earlier this season.  Stay tuned for possible coverage of either game by ECM Sports.