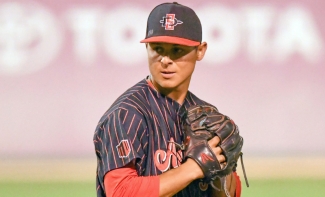 Chase Calabuig paced the offense with a 3-for-5 day, hitting the Aztecs' first home run of the season and a double. Chad Bible had a two-out, bases clearing triple to give the Aztecs a 8-4 lead in the top of the sixth.

Jorge Fernandez and Jacob Flores held the Gauchos hitless over the final three innings with a combined six strikeouts.

The Aztecs will go for the sweep over the Gauchos tomorrow at 1:00 p.m.
Box
Play by play