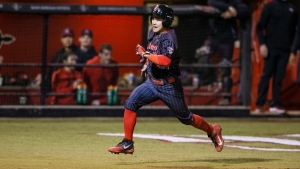 March 22, 2019 (Albuquerque) - Behind Aaron Eden's 7.1 shutout innings and Angelo Armenta's two-run home run in the fourth inning, the San Diego State baseball team defeated New Mexico 4-2 at Santa Ana Star Field on Friday night. The Aztecs improve to 12-8 with a 3-2 Mountain West record, while the Lobos fall to 11-10 with a 3-4 league mark.

Making his fifth start of the season, Eden earned his much-awaited first college win, throwing 7.1 masterful innings with zero runs and six hits allowed. After allowing one hit in each of the first three innings, Eden shutdown the Lobos in the middle innings, keeping New Mexico hitless from the start of the fourth until a Lobo leadoff single in the seventh.

After each of the first nine SDSU batters were retired, the Aztecs broke through in the fourth after a two-run home run by Armenta gave the Aztecs a 2-0 lead. SDSU capped a three-run fourth inning with Chad Bible scoring Casey Schmitt on a fielder's choice.

SDSU scored its final run of the game an inning later, with Matt Rudick singling through the left side of the infield to bring home Mike Jarvis, who kick-started the inning with a triple to left-center.

The Lobos presented a pair of late-inning threats, including a bases-loaded, one-out situation in the eighth. After Michael Paredes started his relief outing with a four-pitch walk, the freshman settled in to force Connor Mang into an inning-ending 6-3 double play.

New Mexico scored its first two runs of the game in the ninth via an Ediberto Reyes two-RBI double.  Valhalla alum Casey O'Sullivan then took over on the mound for SDSU and allowed a four-pitch walk to start his outing, but a diving catch by Brian Leonhardt on a bunt attempt by Brayden Merritt started a 3-4 double play for the first two outs of the ninth.

O'Sullivan then forced Tyler Kelly to lineout to center field in the next at-bat to end the game and secure O'Sullivan's second save of the season.

Seven of SDSU's nine starters recorded at least one hit, led by Jarvis, who went 2-for-4 at the plate.