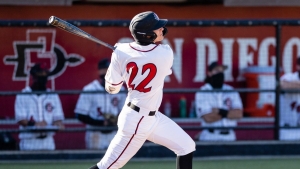 February 27, 2021 (San Diego) - San Diego State came up short for the first time in four home games this season after dropping a 9-3 decision to UC San Diego on Saturday at Tony Gwynn Stadium.

With the setback, the Aztecs slip to 3-2 overall, while the Tritons even their record at 1-1 on the young season.

Reigning Mountain West Player of the Week Jaden Fein smacked a three-run homer in the bottom of the fourth to account for all of SDSU’s scoring. However, the Scarlet and Black was plagued by three errors and left 10 runners on base, including two each over the final three innings, which derailed any comeback hopes.

Leading 1-0 after plating an unearned run in the first, UCSD added three markers in the fourth, highlighted by Everett Lau’s ground-rule double down the right field line that brought home Blake Fitzgerald and Noah Sudyka.

Earlier, Sudyka reached on a fielder’s choice when Aztec first baseman Jacob Cruce’s errant throw to the plate on an infield tapper allowed Marc Filia to score from third.

SDSU narrowed the gap to 4-3 in the bottom of the frame as Fein belted a shot over the left field fence on the first offering from Triton starter Chris Gilmartin, driving in Rudick and Cruce. Previously, Rudick led off with a single up the middle, while Cruce drew a walk following a flyout.

However, the Aztecs were unable to gain the upper hand, as the Tritons scored twice on consecutive walks with the bases loaded in the fifth.

UCSD closed out the scoring in the eighth when Lau led off with home run, while Filia walked with the bases loaded, followed by Fitzgerald’s sacrifice fly.

Kohl Simas (0-1) took the loss for the Aztecs, yielding four runs (two earned) on six hits and two walks while striking out three in three innings, while Luke Mattson (1-0) picked up the victory after tossing two scoreless innings in relief of Gilmartin, who completed four frames.

SDSU was paced by Rudick’s three hits, while Fein finished with two in the loss. Conversely, Lau led all players with four RBIs, while Filia and Blake Baumgartner scored two runs each.

One of five Aztec pitchers, Kelena Sauer impressed in his relief appearance, striking out five batters in 2 2/3 innings without a hit or a walk.

The weekend series shifts to Triton Ballpark in La Jolla on Sunday when the two sides square off in a doubleheader, beginning at 1 p.m. Both games will be streamed on the ESPN3 platform, with a link available on GoAztecs.com.