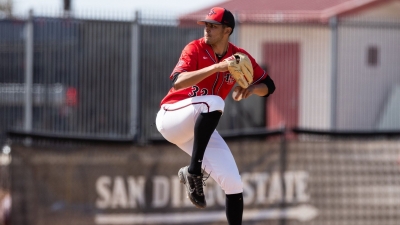 April 25, 2021 (San Diego) - Behind a balanced offense and solid pitching effort, San Diego State completed a weekend sweep of Dixie State with a big 9-1 victory in the series finale on Sunday at Tony Gwynn Stadium.

The Aztecs scored three runs in three separate innings to register their second series sweep of the season and raise their record to 22-9 overall.

Five SDSU players finished with two hits apiece, including Cole Carrigg, who posted a game-high three RBIs, while Jaden Fein scored three runs. In addition, Jacob Cruce got into the act with a pair of RBIs, while Wyatt Hendrie crossed the plate on two occasions. Not to be outdone, Xavier Carter belted a two-run homer in his first at-bat of the season.

On the mound, five Aztec hurlers combined for 13 strikeouts, as the Trailblazers (11-26) whiffed 42 times on the weekend.

SDSU opened the scoring in the second when Fein led off with a center and promptly scored on Carrigg’s double down the left field line. Moments later, Carter launched his first collegiate homer on a 2-1 pitch, which gave the host school a 3-0 advantage.

The Aztecs added three additional markers in the third on an RBI single by Cruce and Carrigg’s two-run double. Previously, Hendrie and Fein each drew a walk, while Cruce followed with a base hit through the right side and took second on the throw to the plate, which was too late to nail Hendrie. Shortly thereafter, Carrigg smoked a 1-2 offering to right for his fifth double of the season, as Fein and Cruce raced home.

The Trailblazers spoiled SDSU’s shutout bid in the seventh, scoring its lone run of the afternoon on a wild pitch by Simas after Flores issued three straight walks with one out. Following another base on balls with two outs, Simas avoided further damage by striking out Jake Engel, who hit four solo home runs in Saturday’s doubleheader.

The Aztecs tacked on three more runs in the seventh to provide for the final outcome, as Hendrie doubled home Max Foxcroft, who led off with a walk and stole second, while Fein and Cruce followed with RBIs singles.

Dixie State utilized 22 players in the game, including five pitchers. However, the Trailblazers mustered only six hits, five of which were singles. Starter Ryan Hardman (0-5) took the loss for the visitors after allowing six runs on five hits and two walks with no strikeouts his three-inning stint.

San Diego State jumps back into Mountain West play next weekend with a three-game series at Nevada April 30-May 1, marking the Aztecs’ first road trip outside of California this season.