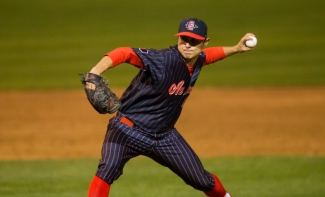 February 20, 2018 (San Diego) - The San Diego State baseball suffered a 3-2 setback against crosstown foe San Diego on Tuesday night at Tony Gwynn Stadium, falling victim to a 10th-inning RBI double by USD’s Dante Gutierrez. The Aztecs fall to 3-1 on the young 2018 season, while USD jumps above .500 at 3-2.

Daniel Ritcheson, who made his first career start Tuesday, was a bright spot for the Aztecs Tuesday night, working around a second-inning solo home run to finish with 4.1 innings pitched, three hits allowed, three walks and four strikeouts.

After USD’s second-inning solo home run, the Aztecs tied the game on a Jordan Verdon RBI single through the middle to score Chase Calabuig in the bottom of the fourth.

The pitching on both sides proceeded to take over until the later stages of the game, with the game staying tied at 1-1 until both teams traded a run in the ninth inning. In the top half, USD scored a run on an RBI single off the bat of pinch hitter Kevin Collard in the top half of the ninth to take a 2-1 lead.

The Aztecs would not go down silently, however, with Grant Mayeaux hitting a single on a 2-1 pitch to score Matt Rudick -- the game-tying run -- from second base.

USD countered with another go-ahead run in the 10th, with Jay Schuyler reaching base on an error and later coming around to score on Gutierrez’s RBI double placed just inside the left field line.

The Aztecs were unable to pull off another rally in the bottom half of the 10th, going down in order to end the ballgame.

Four of the six pitchers for the Aztecs recorded scoreless outings, including Adrian Mardueno, who shined in 1.1 innings of work with only one hit allowed while striking out a pair.

San Diego State hosts the Tony Gwynn Legacy beginning on Friday with a 6:00 p.m. contest against Arizona. The Aztecs wrap up the TGL with games against No. 4 Arkansas and Grand Canyon on Saturday at 6:00 p.m. and Sunday at 2:00 p.m., respectively.