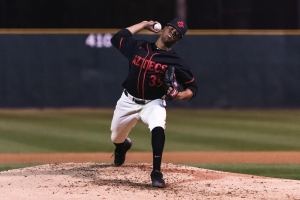 April 14, 2019 (Fullerton) - After clinching a series win on Saturday night, the San Diego State baseball team had its season-best five game winning streak snapped after a 7-2 loss to Cal State Fullerton at Goodwin Field on Sunday afternoon. The Aztecs are now 20-15 on the season while the Titans improve their record to 15-17.

After Cal State Fullerton took a 1-0 lead in the bottom of the first, the Aztecs responded with Jaden Fein's two-run single in the top of the second scoring both Brian Leonhardt and Chad Bible for a 2-1 edge.

Despite the loss, the Aztec bullpen performed well, as Aaron Eden, Adrian Mardueno and Casey Schmitt combined for 5.1 innings without surrendering an earned run. Aztec starter Casey O'Sullivan fell to 3-3 on the year, allowing four earned runs on five hits and three walks.

Eden shined in the middle stages of the game, posting 2.2 shutout innings with only three hits allowed and no walks.