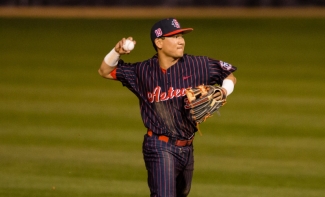 February 24, 2018 (San Diego) - Jacob Maekawa’s run on a wild pitch thrown by Arizona reliever Tylor Megill handed the San Diego State baseball team a 3-2, 10-inning win in SDSU’s opening game of the Tony Gwynn Legacy at Tony Gwynn Stadium Friday night. The Aztecs improve to 4-1 on the young season, while Arizona dips to 3-2 on the year.

Both the Aztecs and Wildcats posted a two-spot in the first inning, as the Aztecs fought out of a 2-0 deficit with a Chase Calabuig 2-RBI double scoring Julian Escobedo and David Hensley.

Offense was at a premium for the rest of the game, largely in thanks to a standout outing by senior Jacob Erickson, who logged a career-high seven strikeouts in 4.2 innings of work. Erickson took over for starter Logan Boyer in the fourth inning and retired each of the first five Wildcats he faced via strikeout. The redshirt senior concluded his day with only two hits allowed while posting his longest outing since his freshman year.

Following Erickson was Adrian Mardueno and Jorge Fernandez, who both recorded scoreless outings. Mardueno retired each of the two batters he faced, including a pivotal strikeout to end the top of the eighth and leave a Wildcat runner stranded in scoring position.

Fernandez posted 1.2 innings to earn his first win of the season, allowing only one hit while striking out three. Combined, the Aztec pitching staff held Arizona to just a .125 average (1-for-8) with runners in scoring position.

To lead off the top of the 10th, Maekawa drew a leadoff walk and advanced to second on an Escobedo sacrifice bunt. Hensley then advanced Maekawa to third on a groundout to second base, setting up for Maekawa to score on a game-ending wild pitch.

SDSU baseball continues Tony Gwynn Legacy action today against No. 4-ranked Arkansas. RHP Harrison Pyatt (0-0, 4.15 ERA) is scheduled to take the mound for SDSU, while RHP Isaiah Campbell (1-0, 2.25 ERA) is expected to take the ball for the Razorbacks.