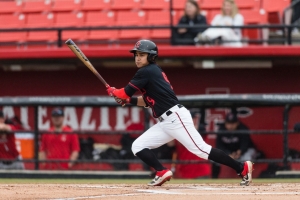 March 15, 2019 (San Diego) - Matt Rudick hit a walk-off single to score Joe Fitzhugh with two outs in the bottom of the 10th as the San Diego State baseball team won its series opener against Seattle, 6-5. SDSU improves to 9-7 on the year, while Seattle falls to 4-13.

The game-winning run transpired after Fitzhugh was able to reach base on an error by Seattle third baseman Austin Lively and later moved up to second on a wild pitch. After Jacob Maekawa grounded out for the second out, Rudick poked a single through the middle of the infield on a 1-1 count to score Fitzhugh from second base.

Rudick's 10th-inning single marked as SDSU's first base hit since Casey Schmitt hit a one-out triple in the sixth.

With the Aztecs facing a 5-3 deficit, the Aztecs capitalized on some Redhawk miscues in the bottom of the seventh with Rudick and Angelo Armenta both getting hit by a pitch and Jacob Maekawa and Julian Escobedo both drawing walks. Armenta's hit by pitch with the bases loaded forced Maekawa to score, and Brian Leonhardt later scored Rudick on a sacrifice fly to left to tie the game at 5-5.

O'Sullivan earned his third win of the year after stranding a pair of base runners in the 10th, as the Redhawks had a one-out base runner after an Aztec base runner. After a sacrifice bunt, SDSU intentionally walked Seattle catcher Kyler Murphy before O'Sullivan induced an inning-ending Jacob Prater fly out.

SDSU scored its first three runs of the game in a five-hit fourth inning after Escobedo and Armenta both led off the inning with infield singles. Armenta later crossed the plate on a passed ball, and Chad Bible drove home Escobedo on a single through the left side of the infield before Bible later came around to score on a Schmitt single.

Bible and Schmitt led the Aztecs offensively, going 2-for-4 and 2-for-5, respectively.

SDSU looks to clinch its second consecutive weekend series win on Saturday against Seattle. First pitch is scheduled for 6:00 p.m. with RHP Harrison Pyatt taking the ball for the Aztecs.