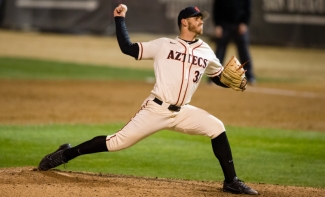 SDSU has allowed one run over its last three games

April 28, 2018 (San Diego) - The San Diego State baseball team logged its second shutout over its last three games to defeat UNLV 1-0 in a series-opening contest at Tony Gwynn Stadium Friday night. SDSU grows its lead over UNLV to a game-and-a-half in the Mountain West standings and improves to 28-14 (11-8 MW), while UNLV drops to 29-15 (10-9 MW).

Harrison Pyatt continued his impressive month of April, throwing six shutout innings and recording a career-high nine strikeouts while surrendering just three hits. Pyatt started his outing not allowing a hit to each of the first nine batters he faced and only ran into a pair of small jams, as a two-out double by Max Smith in the fourth gave UNLV a pair of runners in scoring position before Pyatt induced a frame-ending groundout against UNLV's Grant Robbins.

In the sixth, Pyatt allowed a leadoff double to Kyle Isbel to give UNLV a chance at tying the game. Pyatt ended his outing by stranding Isbel, striking out each of the next three batters to maintain SDSU's 1-0 lead.

SDSU's lone run came in the bottom of the second, as Casey Schmitt scored Julian Escobedo on a hard-hit RBI double that fell out of Grant Robbins' glove on a full-extension diving catch attempt in the left centerfield gap.

Schmitt proved to play a pivotal role on the mound as well, posting 2.1 innings of hitless relief to earn his sixth save of the season. Schmitt entered his outing with runners at the corners and after walking Dillon Johnson to load the bases, Schmitt worked his way around UNLV's scoring threat, forcing an inning-ending groundout to preserve the Aztecs 1-0 lead. Schmitt capped the top of the eighth with back-to-back strikeouts before allowing just one base runner in the ninth to complete the seven-out save.

Escobedo and Chase Calabuig led the Aztec lineup with multi-hit performances, going 2-for-4 and 2-for-3, respectively.