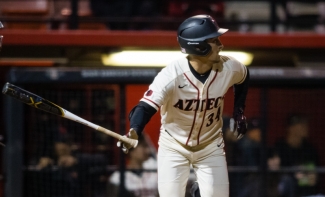 April 14, 2018 (San Diego) - The San Diego State baseball team defeated Cal State Fullerton, 6-3, at Tony Gwynn Stadium on Friday night to snap the Titans' six-game winning streak and improve to 22-12 on the season. CSF falls to 16-16 on the season.

The Aztecs jumped on CSF ace Colton Eastman early with a three-run first inning, including a two-run home run by Chase Calabuig and a wild pitch that allowed Jordan Verdon to score.

The Aztecs were quick to grab some insurance in the bottom of the eighth when the Titans made a move to the bullpen, posting a three-run, three-hit frame off Titan reliever Blake Workman. Julian Escobedo drove home Calabuig on a single to start the scoring in the bottom of the eighth, and in the next two at-bats, Chad Bible drove in Escobedo on a well-hit triple into the gap in right-center and came around to score after Casey Schmitt singled through the right side of the infield.

Harrison Pyatt allowed just one run over four innings of work in his return to the weekend rotation. After Pyatt got into a bases-loaded, no-out jam in the top of the fifth, Jacob Erickson came on and stranded all three of his inherited runners, inducing a 5-2 fielder's choice and a 6-3 double play to end the threat and preserve SDSU's 3-1 lead.

Erickson earned his third win of the season, pitching three innings with three hits and one run allowed while striking out a pair and walking none.

Casey Schmitt notched his second save of the season, retiring each of the game's final two batters, including a game-ending strikeout against Titan three-hitter Ruben Cardenas.

Jordan Verdon and Schmitt led the Aztecs, with each going 2-for-4 at the plate.

SDSU and CSF continue its three-game series tonight at 6:00 p.m. The first 500 fans in attendance at baseball or softball will receive a free Aztec hat. RHP Garrett Hill (6-1, 1.47) looks to continue the strong start to his 2018 campaign and the Titans will send RHP Tommy Wilson (3-0, 3.29 ER) to the mound.
Box