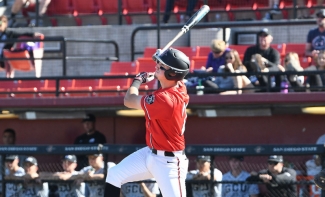 May 1, 2018 (San Diego) - The San Diego State baseball team defeated UC Riverside 8-6 in its regular season non-conference finale at Tony Gwynn Stadium Tuesday night. SDSU, which extended its season-best winning streak to six games, stands at 31-14 on the year while UCR drops to 16-23.

The Aztecs used the long ball to account for six of its eight runs in the contest, as a solo shot by Chase Calabuig in the first, a three-run homer by Granite Hills alum Jordan Verdon in the third, and a two-run blast by Chad Bible in the third helped SDSU build a 7-1 lead. Calabuig, Verdon and Bible hit their fifth, ninth, and eighth home runs of the season, respectively.

Calabuig added an insurance run in the top of the seventh with SDSU leading 7-5 by leading off the frame with his 17th double of the year and later scoring on a Dean Nevarez sacrifice fly.

Logan Boyer made his first start since Feb. 23 and worked around a two-out error to post a scoreless frame. Justin Goossen-Brown took over pitching duties and ultimately earned his fourth win of the season, pitching three innings with two hits and one run allowed while striking out five.

With UCR trailing 7-1, the Highlanders brought itself within striking distance with a three-run fifth inning, including a two-run home run by shortstop Colby Schultz and an RBI single by third baseman Nathan Webb.

A run in the seventh and a run in the eighth cut SDSU's lead to 8-6. However, Casey Schmitt was called upon in his third save situation in the last four games and lived up to the task, forcing a leadoff groundout before recording a 6-4-3 double play to end the inning and seal SDSU's 8-6 victory.

The Aztecs jump back into Mountain West play this weekend on the road, facing New Mexico in a three-game series starting Friday at 5:00 p.m. MT.