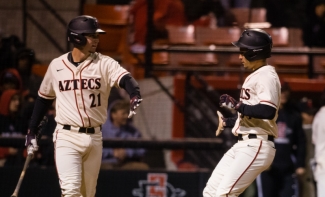 Justin Goossen-Brown struck out 10 in 6.1 innings to earn first win

February 26, 2018 (San Diego) - The San Diego State baseball team used a quality start from Justin Goossen-Brown and a four-run fifth inning to secure a 4-3 win over Michigan on Tuesday night at Tony Gwynn Stadium. The Aztecs conclude its season-opening eight-game homestand with a record of 6-2, while the Wolverines slip to 2-5 on the 2018 season.

An unearned first-inning run was all Goossen-Brown allowed for the game’s first six innings, as the redshirt junior enjoyed a stretch of 13 consecutive batters retired between the third and sixth innings. Goossen-Brown earned the win in his first start as an Aztec, racking up an SDSU season-high 10 strikeouts while not surrendering a walk.

The Aztecs strung together four consecutive base hits to help generate four runs in the bottom of the fifth. Julian Escobedo led off the frame with a leadoff single and later scored from first on a one-out RBI double by Jacob Maekawa.  Matt Rudick followed Maekawa’s double with an extra-base hit of his own, smacking an RBI triple off the wall in right field to give SDSU a 2-1 lead. Rudick scored in the ensuing at-bat after an RBI single by David Hensley, and to cap the scoring, a single by Chase Calabuig and a walk by Dean Nevarez loaded the bases before Jordan Verdon drove in SDSU’s fourth run after being hit by a pitch.

Michigan struck again for a run in the eighth, however, Calabuig made the game-defining play from right field by firing a strike to throw out the would-be game-tying run after Michigan’s Jonathan Engelmann singled to drive in Michigan’s third run and end the top of the eighth after Christian Bullock was thrown out.

To close it in the ninth, Jorge Fernandez earned his second save in as many days after posting a hitless frame to preserve SDSU’s 4-3 victory.

San Diego State concludes a five-games-in-five-days stretch with a trip up I-5 to UC Irvine tomorrow. First pitch in Orange County is scheduled for 6:30 p.m.