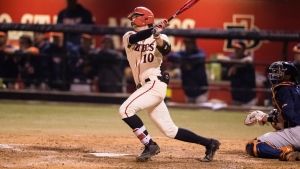 June 16, 2020 (San Diego) - San Diego State third baseman/relief pitcher Casey Schmitt has been chosen by the San Francisco Giants in the second round of the 2020 Major League Baseball Draft on Thursday with the 49th overall pick.

With his selection, Schmitt gives the Aztecs 220 MLB draft choices in program history and 22 over the last six years after becoming the highest SDSU player drafted since Stephen Strasburg was chosen by the Washington Nationals with the No. 1 overall pick in 2009.

As the Aztecs’ starting third baseman, Schmitt rallied from a slow start at the plate to finish among the Mountain West leaders in several categories during the 2020 campaign, including batting average (11th - .323), hits (T-12th - 20), slugging percentage (19th - .452) and on-base percentage (20th - .386). He was just beginning to hit his stride before the COVID-19 pandemic, ending the year with a six-game hitting streak while notching two or more hits in his final four outings.

Schmitt, who received third-team All-America recognition from Collegiate Baseball magazine, also tied for the national lead with six saves in eight relief appearances on the mound, compiling a 3.75 ERA and 10 strikeouts in 12.0 innings. With his effort, the Eastlake High alumnus climbed into fourth place on the school’s all-time list with 23 career saves.

An all-Mountain West honoree, Schmitt was earlier named conference Pitcher of the Week on Feb. 24 after recording consecutive saves against Power 5 schools Iowa and Nebraska at the Tony Gwynn Legacy (Feb. 21-22) to go with another save earlier that week vs. No. 24 Cal State Fullerton (Feb. 18). He also saved games against 2018 national champion Oregon State (March 1), helping SDSU earn a series split, as well as at No. 11/14 Oklahoma (March 6).

Over the past three years, Schmitt made 121 starts in 130 games played, posting a career .295 batting average to go with six home runs, 77 RBIs and 71 runs scored. In addition to his save total, the MLB prospect has appeared in 50 games with four starts as a pitcher, posting a 4-5 record and a 2.48 ERA while striking out 78 batters in 87.0 innings.

As a freshman in 2018, Schmitt established an SDSU’s single-season earned run average record with a 0.28 mark (minimum 30 IP) and was named Most Valuable Player in the Mountain West Championship.

The San Diego State baseball program had its second player selected in the 2020 MLB Draft on Thursday when shortstop Anthony Walters was taken by the New York Mets in the third round with the 91st pick overall.

Along with third baseman/relief pitcher Casey Schmitt, who was taken earlier in the day by the San Francisco Giants in the second round with the 49th pick, Walters and his infield companion give the Aztecs 23 draft picks over the last six years and 221 overall for the program since 1965.

In addition, Schmitt and Walters’ selections mark the first time San Diego State has had two players chosen in the first 100 picks of the MLB Draft since Royce Ring (Chicago-AL, No. 18) and Taber Lee (Pittsburgh, No. 73) in 2002.

A transfer from Mount San Antonio College in Walnut, California, Walters started all 16 games during an abbreviated 2020 campaign for the Scarlet and Black, hitting .271 (16-59) with one homer, eight RBIs and eight runs scored. At the shortstop position, he led the Aztecs with 35 assists and fielded a team-best eight double players.

Additionally, Walters tied for fourth on the squad with multiple hits in five games, including a season-high three at No. 11/15 Oklahoma on March 8, which proved to be SDSU’s final game of the season. In that contest vs. the Sooners, the redshirt junior smacked his lone double of the year and scored a season-high three runs in a narrow 9-8 defeat in 10 innings.

Earlier in the home opener against No. 24 Cal State Fullerton on Feb. 18, Walters belted a two-run homer to lift SDSU to an 8-4 victory, as the Aztecs defeated the Titans for the seventh time in the last nine meetings between the two squads.

After graduating from Tustin (Calif.) High School, Walters played one season at California in 2017, when he started 19 of 34 games, seeing action at shortstop, second base, left field and third base.

Walters subsequently enrolled at Mt. SAC for the 2018 season, earning first-team all-state honors from the California Community College Baseball Coaches Association (CCCBCA) after batting .374 in 45 games with 10 home runs and 62 RBIs. He also landed a spot on the ABCA/Rawlings Pacific Association all-region second team and was an all-South Coast Conference first-team selection after racking up 20 doubles and 52 runs scored, helping the Mounties reach the CCCAA State Championship.