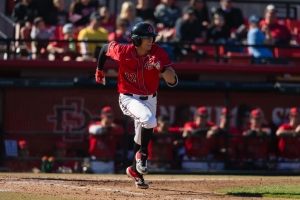 March 19, 2019 (Los Angeles) - The San Diego State baseball team had its four-game winning streak come to a close on Tuesday night, falling to Loyola Marymount 5-1 at Page Stadium. The Aztecs fall to 11-8, while the Lions improve to 12-7 and extend their win streak to six.

Jaden Fein hit his first career home run in the top of the fifth, erasing what was a 1-0 lead for LMU after sending a 1-1 offering from Nate Madole over the left-centerfield wall.

Trailing 3-1 in the top of the seventh, Chad Bible and Brian Leonhardt were hit by pitches in consecutive at-bats to give the Aztecs a late-inning threat. After Joe Fitzhugh recorded a two-out infield single to load the bases, Lions right-hander CJ Fernandezees was able to force pinch-hitter Deron Johnson to ground out to second base to end the potential run-scoring opportunity.

The Lions carried the momentum into adding an insurance run in both the seventh and eighth, bringing the score to its final 5-1.

With his performance today, Adrian Mardueno has an ERA of 1.31 on the season -- the best among qualified Aztec pitchers (1 IP per game played)