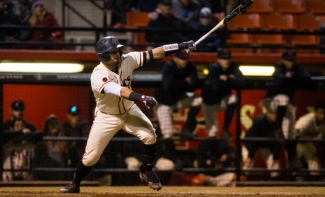 April 22, 2018 (San Diego) - The San Diego State baseball team fell on Saturday night, 7-4, as the series with Fresno State stands even heading into tomorrow's rubber game. The Aztecs stand at 25-14 with a 9-7 league record -- still good for second place in the Mountain West -- while Fresno State leaps to 23-15 with a 9-11 league record.

Thanks to a pair of Fresno State errors, the Aztecs took an early 2-0 lead after Bulldog miscues allowed Matt Rudick and Chase Calabuig to score.

SDSU starting pitcher Garrett Hill allowed just one unearned run in the third before a Bulldog run scored on a 4-6-3 double play in the fourth to tie the game at 2-2. Hill was able to limit the damage in the third inning, inducing a frame-ending groundout to strand a pair of runners in scoring position.

The Bulldogs took its first lead of the game in the sixth, using back-to-back base hits by Carter Bins and Jeremiah Burks to grab a 3-2 advantage. After Hill's departure,  Fresno State grew that lead to 7-2, using a four-run, five-hit frame.

Despite being held hitless for 13 consecutive at-bats between the fifth to ninth innings, the Aztecs showed signs of a potential comeback in the ninth, with David Hensley and Jordan Verdon both working walks before eventually being driven on a Dean Nevarez RBI single and a Chad Bible bases-loaded hit by pitch, respectively. With the bases loaded and the potential game-winning run at the plate, Fresno State's Davis Moore was able to work around his control issues and halt any chance of an Aztec comeback, forcing Grant Mayeaux to pop out to shortstop to end the game.

The Aztecs were hindered by going 3-for-21 with runners on base and 2-for-13 with runners in scoring position.

Hill was dealt the loss despite turning in a quality start, allowing just two earned runs on six hits over six innings pitched while striking out five. Casey O'Sullivan posted a strong performance out of the bullpen, scattering three hits over 2.1 shutout innings of work while striking out three and walking none.

UP NEXT
Tomorrow's rubber game and battle for 100th win in the all-time series is set to start at 1:00 p.m. Kids are welcome to run the bases at Tony Gwynn Stadium following the conclusion of the game.
Box