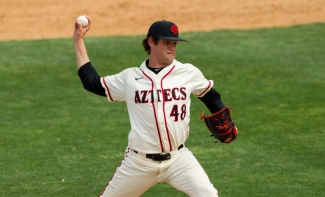 May 5, 2018 (Alberquerque) - Despite starting its afternoon off with a three-run home run by Jordan Verdon in the top of the first inning, the San Diego State baseball team saw its season-best seven-game winning streak come to a close after a 4-3 setback against New Mexico at Santa Ana Star Field on Saturday afternoon. SDSU (32-15 overall) remains in second place in the Mountain West standings with a 14-8 league record, while UNM jumps to 16-29-1 overall and 9-17 in the Mountain West.

Verdon's three-run home run in the first was the junior's team-leading 11th of the season. That was all of the run production the Aztecs mustered, however, as the Lobos held SDSU to five hits and stranded six Aztec runners on base for the remaining eight innings.

New Mexico responded to SDSU's game-opening three-run frame with a trio of runs of its own in the bottom half of the first. The game remained tied until UNM's Justin Watari brought home an unearned run on a two-out RBI single in the bottom of the sixth.

The Aztecs showed signs of a comeback in the top of the ninth after Casey Schmitt worked a one-out walk. Schmitt advanced to second after pinch-hitter Grant Mayeaux singled through the left side of the infield, and in the next at-bat, both Schmitt and Mayeaux moved into scoring position after running on a 3-2 pitch that forced Matt Rudick to ground out to shortstop.

With the tying run at third and the go-ahead run at second, UNM's closer Chris Tripp struck out David Hensley on a 3-2 pitch that caught the outside edge of the strike zone.

Justin Goossen-Brown was dealt a tough-luck loss, pitching 4.1 innings of relief without allowing an earned run and scattering three hits. Jacob Erickson also pitched well out of the SDSU bullpen, allowing just one hit in 2.2 innings of shutout relief.

Verdon recorded SDSU's only multi-hit performance, going 2-for-4 with his first-inning home run and team-leading 21st double of the year.

SDSU goes for its fourth consecutive series win in tomorrow's rubber game against UNM, scheduled to start at 1:00 p.m. MT/noon PT. SDSU enters tomorrow 4-0 in rubber games this season and 10-0 when playing on Sundays.