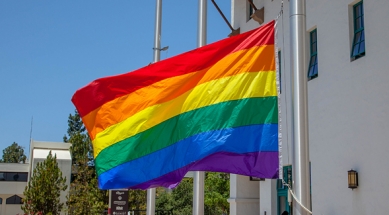 The flag symbolizes the diversity of sexual orientations and gender identities in the SDSU community. At the 11th annual flag raising ceremony, the campus celebrated accomplishments of LGBTQ students.

SDSU continues to be nationally recognized as one of the most LGBTQ-friendly universities in the nation. The Campus Pride Index recently ranked SDSU in its 2017 “Best of the Best” Top 25 list of LGBTQ-friendly colleges and universities. SDSU has been included in this ranking for the past eight years.

The Campus Pride Index is a tool that compares LGBTQ-friendly policies, programs and practices on college campuses. Campus Pride works alongside students, faculty, staff and administrators at more than 1,400 campuses to help support and improve the quality of campus life for LGBTQ people.

SDSU was also ranked No. 11 among the top 25 best colleges for LGBTQ students, according to a new ranking released jointly by Best Colleges and Campus Pride.

Among SDSU’s assets, Best Colleges cited the university's Pride Center; its LGBT studies major—only the second of its kind in North America; and its annual Lavender Graduation ceremony, which celebrates the achievements of graduating LGBTQ students and awards faculty and staff who have enhanced campus climate for LGBTQ students.