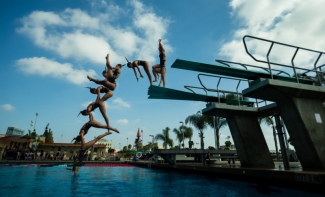 March 5, 2018 (Flagstaff) - The San Diego State swimming and diving team had five divers in action at the NCAA Zone E Championships on the first day of competition featuring 1-meter action in a 59-diver field.

Alexandra Caplan led the Aztecs with a 13th-place finish, scoring at 266.90. Caplan’s effort was followed by sophomore Marie Yacopino, who placed 35th with a 234.05.

Competition resumes tomorrow with 3-meter action, starting with the preliminary round at 11 a.m. and the final round starting at 2:35 p.m. Following 3-meter competition tomorrow, the event concludes with platform action on Wednesday, March 7.