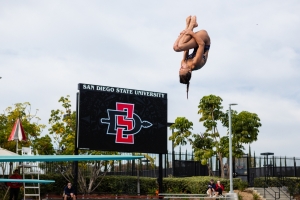 January 20, 2019 (Los Angeles) - The San Diego State divers finished action at the UCLA Diving Invitational on Sunday, competing in 1-meter competition. Ximena Lechuga Gonzalez led the Aztecs for the third consecutive day, finishing the day with a ninth-place finish with a final score of a 532.10.

In addition to Lechuga Gonazelez's top-10 finish, Marie Yacopino posted a strong performance with a 521.30 to finish in 12th. With Lechuga Gonzalez and Yacopino both finishing in the top 12, SDSU finished the UCLA Diving Invitational as one of four schools in the top 12, joined by UCLA, USC, and Northern Arizona.

In the preliminary round, Yacopino led the Aztecs with a score of 265.25 -- the ninth-best score in the field. Lechuga Gonzalez closely followed with a 260.05 -- good for a 12th-place finish to reach the final round.

The Aztec divers now look towards the Northern Arizona Diving Invitational, which begins on Feb. 1. in Flagstaff, Ariz.