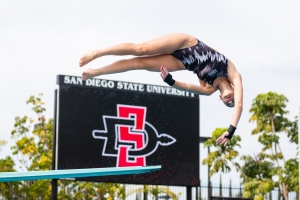 January 19, 2019 (Los Angeles) - The San Diego State divers competed on the platform board on the second day of the UCLA Diving Invitational and were led by Ximena Lechuga Gonzalez, who placed eighth in the 44-diver event.

After strong performances in the preliminary round, Lechuga Gonzalez and Delaney Gallagher reached the finals, placing eighth and 11th, respectively.

After recording a 230.40 -- the eighth-best platform score in school history and the seventh-best score among 44 competitors -- Delaney Gallagher finished her day with a 442.20 to claim 11th place.

Lechuga Gonzalez posted a 225.00 in the preliminary round to post the competition's ninth-best preliminary score. The Tijuana, Mexico, native bested her preliminary score with a 227.75 -- the 10th best score in the Aztec record book.

With Lechuga Gonzalez and Gallagher's performances, the Aztecs were one of three schools with multiple divers in the top 10 of the preliminary round, joined by only USC and UCLA.

The Aztecs conclude the UCLA Diving Invitational tomorrow with competition on the 1-meter board.