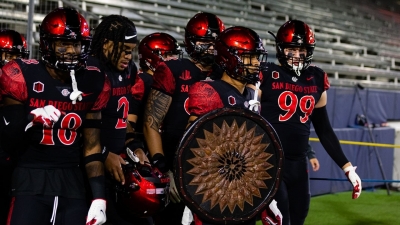 Game times, television arrangements and moves to non-Saturdays will be announced at a later date

March 5, 2021 (San Diego) - The San Diego State football team and Mountain West released its 2021 schedule on Friday. Game times and television arrangements, including moves to non-Saturdays will be announced at a later date.

The Aztecs will play seven of their 12 games in 2021 at Dignity Health Sports Park in Carson, Calif. and will have only one road contest over the first six weeks of the season. The 2021 Mountain West Championship has been slated for Dec. 4.

SDSU then plays at Arizona on Sept. 11 in its only road game over the first six weeks. San Diego State is 5-10 all-time against the Wildcats but the two schools have not met since 23-10 UA victory in the 2001 opener (Aug. 30) in San Diego. Although the Aztecs have lost four straight in the series, they are 5-2 against the Pac-12 Conference since the 2016 season.

SDSU returns to Carson for a home game against Utah on Sept. 18. San Diego State and the Utes haven’t played since the 2010 season when Utah was still in the MW. In that game, the then No. 25/24 Utes escaped San Diego with a 38-34 win.

The Aztecs wrap up their non-conference play the following week (Sept. 25) in Carson against Towson in the first meeting in series history.

Following an open date (Oct. 2), SDSU kicks off Mountain West play by hosting New Mexico on Oct. 9. San Diego State has won seven straight meetings and control the all-time series 27-15, including a come-from-behind 31-23 victory over the Lobos in Albuquerque, N.M., the last time the two teams met on Nov. 3, 2018.

The Aztecs hit the road for the first time in 35 days on Oct. 16 when they travel to defending MW champion San José State. SDSU had its eight-game winning streak against the Spartans snapped in a 28-17 setback last season (Nov. 6), but still hold the edge on the all-time series by a 22-20-2 margin

San Diego State stays on the road the following week (Oct. 23) when they meet Air Force in Colorado Springs, Colo. The Aztecs have beat the Falcons in eight straight meetings, but the last three wins have come by a total of 11 points. AFA leads the all-time series 19-17.

SDSU returns to Carson on Oct. 30 for a game against Fresno State. San Diego State won the last meeting 17-7 in 2019 and reclaimed The Old Oil Can before the 2020 matchup was canceled. The Aztecs lead the all-time series 30-25-4.

SDSU makes the trip across the Pacific Ocean the following week when it takes on Hawai’i on Nov. 6. San Diego State snapped a modest two-game losing streak with the Rainbow Warriors last year in Carson in a 34-10 triumph and now leads the all-time series, 22-11-2.

SDSU plays the following week at home against Nevada on Nov. 13. San Diego State has lost three straight games against the Wolf Pack - its only active losing streak (two or more games) against a MW opponent - by a combined 13 points. Down 26-22 last year in Reno, the Aztecs had a chance to win the game but failed to score against Nevada on a first-and-goal situation from the Wolf Pack 4-yard line. SDSU still leads the all-time series, 7-6.

San Diego State next plays at UNLV on Nov. 20. The Aztecs have won six of the last seven meetings in the series, including a 34-6 victory in the 2020 opener at Dignity Health Sports Park and lead the all-time series 20-10.