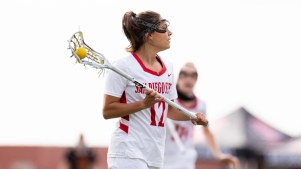 March 12, 2021 (Denver) - The San Diego State lacrosse team battled back from an early 6-0 deficit to outscore the University of Denver Pioneers 10-8 in the final 37:34 of play but fell to the No.22-ranked team in the nation Friday afternoon 14-10 at Peter Barton Lacrosse Stadium in Denver, Colo.

Senior Emily Resnick was the star of the Aztecs’ offensive attack, scoring four goals and assisting on two more for a six-point effort. Senior captain Bailey Brown added a hat trick on four shots, nine draw controls, and a caused turnover. Redshirt-senior Lexi Tan scored two goals and junior Arielle Shahrabani found the back of the net to round out the Aztecs’ scoring efforts. The Pioneers saw three student-athletes earn hat tricks as Caroline Wiseman, Kayla DeRose, and Eliza Radochonski each added three points to the scoreboard. Mackenzie Wallevand, Bea Behrins, Kailey Conry, Ellie Curry and Charlotte Boote each found the back of the net to total Denver’s scoring on the day.

Junior Cailin Young led the team with three ground balls while also snagging two draw controls as the Aztecs won the draw control battle over the Pioneers 15-11. Redshirt senior Katy Sharretts had an incredible day in the goal, earning 14 saves on 28 attempts (SOG) for a .500 save percentage while adding two ground balls. Denver’s Molly Little totaled four draw controls throughout the matchup and their duo of Amelia Cole/ Chloe Lewis in the goal snagged six saves on 16 shots on goal for a .375 combined save percentage.

The Pioneers opened up with a 6-0 run, led by three goals from Wiseman. Denver held San Diego State silent until 7:34 left in the first half when Brown found the net for the Aztecs to give them their first points of the day. With the score at 6-1, the Aztecs would score three of the next five goals thanks to efforts from Tan, Resnick, and Brown’s second score of the matchup to head into the break with a four-goal deficit 8-4.

Tan quickly opened the second half with her second goal of the day just 1:58 into the final 30 minutes of the play, assisted by Resnick. The Pioneers responded with two scores from Bea Behrins and Kailey Conry, but the DU run was cut off by Resnick with a free-position goal, her eighth score of the season. Denver’s Curry and Boote each added a goal to send the scoreboard to 12-6 with 17:56 left to play.

The Aztecs went on a two-goal run of their own with Resnick earning a hat trick with her third goal of the day and Arielle Shahrabani adding a score cut the Pioneers’ lead to 12-8. Radochonski would respond and add a point to Denver’s total and was followed by a response from Resnick, her fourth goal of the game, sending the game to 13-9 with 6:40 left to play. Just 36 seconds after Resnick’s score, DU’s Kayla Denrose found the back of the net to bring the score to 14-9. Brown would finish the game’s scoring with her third goal of the day, helping the Aztecs break into double-digit scoring for the first time since their matchup at California.

“We had to work through some turnovers in the first 15 minutes, but then we got into a rhythm,” head coach Kylee White noted. “I was so proud of my team for how they kept their composure for the rest of the game. They worked at it (the game plan) the entire game and did not let a turnover or a goal bring them down. We were able to move on faster and had great “next-play” speed. Before the game, we made some adjustments on defense and offense, and the tweaking we did to match our personnel helped the student-athletes really buy into today’s matchup. There is a big difference between playing and competing, and we competed today. ”

The Aztecs travel a short way to Boulder, Colo. for a Sunday morning matchup with the RV Colorado Buffaloes at their Indoor Practice Facility (due to impending winter weather). The opening draw is set for 10 a.m. MT/9 a.m. PT.