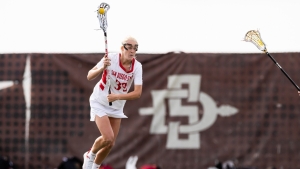 Redshirt senior Lexi Tan was the lone Aztec to score more than one goal on the day, accruing a stat line that included two goals on five shots and a caused turnover. Senior Bailey Brown, graduate student Emily Resnick, and junior Arielle Shahrabani each found the back of the net to round out SDSU’s five goals of the day. The Buffs were led by five-goal performances by both Charlie Rudy and Sadie Grozier, while Devon Bayer found the back of the net twice and Zoe Lawless and Liz Phillips each scored a goal for Colorado for their total of 14 scores.

Brown and senior Julia Sheehan both led the Aztecs in ground ball pickups, totaling three each in the matchup with the Buffs. Brown and redshirt freshman Avonna Usher were the leaders in the draw circle for SDSU, each adding three draw controls to their respective stat lines. Redshirt senior Katy Sharretts snagged 14 saves on 28 attempts for a .500 save percentage, her fourth game this season with a save ratio at or over .500. The Buffs’ goalkeeper Julia Lisella earned 12 saves on 17 attempts, totaling a .705 save percentage on the day.

Colorado opened the matchup with a 5-0 scoring run thanks to three goals from Rudy and one score apiece from Grozier and Bayer. Tan started the Aztecs’ scoring attack with a goal assisted by Sheehan with 18:25 left to play in the first half, but the Buffs quickly responded with two more scores from Grozier. Shahrabani added the Scarlet and Black’s second score of the day, assisted by Avonna Usher, and Colorado closed out the first half with another 3-0 scoring run with a goal each from Rudy, Grozier, and Bayer.

San Diego State came out of the halftime break firing, scoring three goals in the first 10 minutes of play and silencing the Buffs on offense for 12 minutes. Tan kicked the Aztecs’ 3-0 runoff with a goal just 2:47 into the final 30 minutes of play while Brown came charging down the field just 44 seconds later to find the back of the net. With the score at 10-4, Resnick scored the Aztecs’ final goal of the game with 20:03 left in the matchup to bring the Aztecs’ deficit to 5 scores. The Buffs finished the game on a 4-0 run with goals from Phillips, Grozier, Rudy, and Lawless.

Tan led the Aztecs’ scoring attack for the third game this season, also topping the stat sheets in SDSU’s games with No. 20 USC and UC Davis. The redshirt senior leads the Aztecs in goals this season with 15 so far in the 2021 season.

“Today we had another good second half, but we need to piece two together,” noted head coach Kylee White. “I am proud of how we did not give up but instead made adjustments, found some fire and heart, and finished out the game. The thing I am most excited about is that we are leaving this weekend a better team. We are using our opportunities this season to get better. We have work to do and when we finally get back to The Mesa, that is exactly what we will do.”

The Aztecs have a 13-day break from competition, next meeting the Coastal Carolina Chanticleers in San Diego on March 27. The opening draw is set for 1 p.m. at Aztec Lacrosse Field.