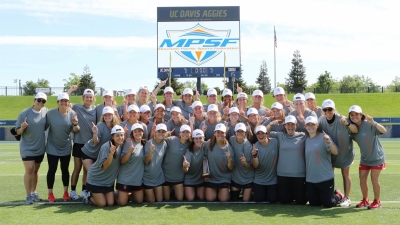 Redshirt junior goalkeeper Katy Sharretts broke her own school record with 19 saves, including 14 in the second half alone, while seniors Harlowe Steele, Kirstie Greenlaw and freshman Caitlin Jones each netted hat tricks to help the Aztecs win their third in a row and avenge a 16-12 loss to the Aggies during the regular season on April 13.

In addition to her offensive output, Steele led all players with three caused turnovers and tied for game-high honors with four ground balls to go with four draw controls of her own.

The Aztecs won for just the second time this year (2-7) when getting outshot after facing a 36-29 deficit in that category, including a 26-22 spread on net. However, SDSU maintained a slight 23-22 edge in ground balls and converted 88.0 percent of its clearing attempts (22-25), compared to UCD’s 73.7 percent clip (14-19). Sunday’s contest also marked the first time this season the Scarlet and Black tied its opponent in draw controls after the two sides won 12 apiece.

With the score knotted at 3-3 following a goal by the Aggies’ Sorana Larson at the 14:47 mark of the first half, the Aztecs reeled off consecutive markers by four different players to take the lead for good. Before intermission, Greenlaw, Steele and redshirt sophomore Lexi Tan each found the back of the net, while Brown tickled the twine with just over two minutes elapsed in the second period to give the visitors a 7-3 cushion.

UC Davis (9-8) cut the deficit in half with a 3-1 spurt, bookended by Mar Alvear’s two goals, while Larson hit pay dirt after Peel’s free position conversion, narrowing the gap to 8-6 by 16:57 mark.

However, the Aggies were unable to draw closer, as the Aztecs turned on the afterburners with a 7-1 blitz over the 15:22 to put the championship on ice. Jones and Greenlaw fueled the run with two goals apiece, while Brown, Haight and Steele added single tallies.

In addition to Alvear, Amanda Outcalt scored two goals for UCD; however, MPSF Player of the Year Taylor Cuenin, who recorded 47 goals during the regular season, was limited to just one in a losing effort on Sunday.