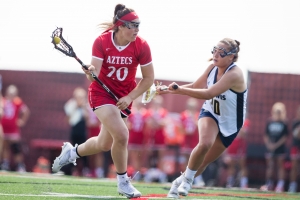 For the second consecutive outing, the Aztecs also received hat tricks from Harlowe Steele and Morgan Taylor to raise their to 2-0 for second year in a row. Not to be outdone, goalkeeper Katy Sharretts came up huge with 13 saves, including 11 in the first half, as the Scarlet and Black won its third straight over the Golden Bears (0-4).

Collectively, SDSU maintained a narrow 23-22 advantage in shots on goal, but still made the most of its free position opportunities, converting 6 of 14 chances, while Cal was just 2-for-7 on its tries. Although the Bears owned a slim 13-11 margin in draw controls, the Aztecs were able to flip the stat in the second half, winning nine time out of 13 draws. In addition, San Diego State held the upper hand in ground balls (18-16).

The two teams were tied 5-5 at intermission before Greenlaw scored two unassisted goals in the first 1:18 of the second half to put the Aztecs in front for good.

The Bears tightened the gap nearly four minutes later on a strike by Kirsten Swanson but could draw no closer the rest of the way.

Taylor scored on an eight-meter shot at the 17:12 mark, while Lexi Tan soon followed a goal off a feed from Greenlaw to give SDSU a 9-6 cushion.

After another tally by Cal’s Swanson with 13:14 left, the Aztecs essentially put the game out of reach with three straight free position goals over a span of 2:16 from Steele, Taylor Sullivan and Morgan Taylor.

On another cold and blustered day that witnessed a brief hailstorm before opening draw, the two sides slugged it out in a low scoring first half.  The Bears opened the contest with a Susie Ropp goal in the first minutes and later extended the margin to 3-1 following strikes by Eliza Christman and Swanson.

However, SDSU answered with a 3-1 spurt of its own, as Taylor, Greenlaw and Steele found the back of the net to level the score at 4-4 by the 8:57 mark.

The teams traded goals in the final five minutes, with Cal’s Caroline Corzel and the Aztecs’ Greenlaw each hitting pay dirt to give the game its 5-5 score by halftime.

“This was a great start to our season,” said SDSU head coach Kylee White. “Playing two strong Pac-12 opponents and coming home with a pair of wins is exactly how we wanted to kick things off. The weekend was filled with outstanding individual performances, but we prevailed because of team effor

“At halftime today, we put a lot of focus on being scrappier on the draw, going together on every ball, and we were able to flip the stat in the second half. We played a good game, but I think the emphasis this week will be on how we start the game.”

San Diego State will hold its regular-season home opener on Friday, Feb. 22 when it plays host to No. 21 USC at Aztec Lacrosse Field starting at 1 p.m.  Free schedule magnets will be available for all fans in attendance.