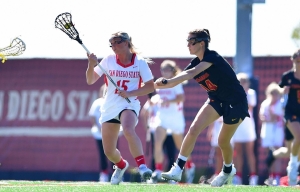 March 5, 2019 (San Diego) - San Diego State opened its five-game homestand in style Tuesday with a 16-10 triumph over Central Michigan at Aztec Lacrosse Field. With the victory, SDSU improves to 4-1 on the season, while Chippewas drop to 2-2 overall.

A trademark for the Aztecs this season has been their balanced offense, with 10 different players scoring goals against CMU, including a game-high four tallies by Taylor Sullivan, while Morgan Taylor netted a hat trick of her own.

In addition, the Scarlet and Black received a pair of strikes from Grace McGinty and Harlowe Steele, while Marissa MacRae established a career best with four caused turnovers. The SDSU charge was also backed by Caitlin Jones, who topped the squad with five draw controls, while Jenny Buckland collected three ground balls, matching Steele and goalkeeper Katy Sharretts for team-high honors.

Collectively, the Aztecs owned a 31-18 advantage in shots on goal while maintaining a slight 15-13 margin in draw controls to help key their win.

SDSU found itself trailing 2-1 at the 21:17 mark of the first half before ringing up five straight goals over a span of 17 minutes to take the lead for good. Sullivan converted a free position attempt to spark the run and later added another marker, along with Lexi Tan and Kirstie Greenlaw.

The Chippewas ended their scoring drought on goal by Natalie Karlen with 3:22 left to give the contest its 6-3 score at intermission.

Sullivan got the Aztecs on the board first on a strike with almost five minutes elapsed in the second half before CMU answered with a pair of tallies by Jocelyne Lemay and Jessica Schuchardt just 53 seconds apart, which narrowed the gap to 7-5.

The two teams alternated scores on the next four goals, including one by the Chippewas’ Shannon Doyle at the 13:02 mark.

However, the visitors could draw no closer, as the Scarlet and Black fashioned a 4-0 surge during a three-and-a-half minute span to take control. Madison Nunziata got things rolling with her first goal of the year, while Taylor, Sullivan and Steele continued the barrage in succession, giving the host school a 13-7 cushion with 7:21 left.

Two additional goals by Lemay and one by Karlen offered CMU a ray of hope after trimming the deficit to 14-10, but Taylor found the back of the net on two occasions in the last 2:12 to stymie the Chippewas’ comeback effort.

In front of the net, Sharretts made eight saves for the Aztecs, while her counterpart Dominique Hamman had 15 stops in the loss.

“Give Central Michigan credit, they fought hard for 60 minutes,” said SDSU head coach Kylee White. “We didn’t have a constant energy level from our entire team today. There were a lot of ebbs and flows. But we had bursts and we got some consistent performances from our game-changers. Taylor Sullivan was our spark, she was getting things done all over the field. I was so proud of her. Defensively, Jenny (Buckland) and Marissa (MacRae) showed a lot of fight, and that’s what I think we need to show more of as a team. But I was excited to see some of our younger players contribute there at the end, with Arielle (Shahrabani) and Madison (Nunziata) scoring goals. I thought Hailey Kovinsky had a break-out game, too.”