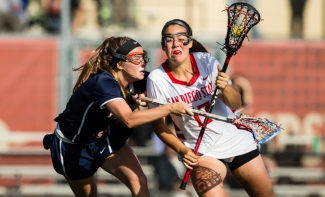 April 28, 2018 (San Diego) - The San Diego State lacrosse team exploded for 11 goals in the first half en route to a 16-6 conquest of Fresno State in the semifinal game of the Mountain Pacific Sports Federation Championship on Friday at Aztec Lacrosse Field.

A balanced offense aided the Scarlet and Black once again as 12 different players scored goals against the Bulldogs (9-9), including junior Harlowe Steele, who netted her sixth hat trick in the last nine game, while fellow classmates Grace McGinty and Paige Hudak finished with two tallies apiece.

Goalkeeper Katy Sharretts, who made four saves in front of the cage for the Aztecs, collected a game-high three ground balls, helping the Aztecs record 10 victories in back-to-back seasons for the first time in program history.

SDSU came out firing on all cylinders, notching the first six goals during a 14-minute span and was never threatened. Natalie Peel opened the scoring on a successful free-position shot with just over a minute-and-a half elapsed in the game, while Jill Haight converted one 30 seconds later to set the tone for the rest of the evening.

The Aztecs kept Fresno State off the board until the 6:54 mark when Kayla Galet found the back of the net on a free-position attempt of her own.

The Bulldogs, who managed to erase a six-goal deficit against SDSU in their regular-season meeting earlier this month in Fresno, were unable to duplicate the feat Friday, as SDSU closed the half with 5-0 blitz to put the game essentially out of reach. Hudak recorded both of her goals during that stretch, while junior Kirstie Greenlaw capped the run on a free-position shot with 54 seconds to go before intermission.

The Aztecs turned on the afterburners in the second half with another five-goal spurt to turn the contest into a rout. Freshman Matilda Adams recorded her second tally of the season at the 14:12 mark, while Ryli Quinn closed out the scoring for SDSU with a goal just over a minute later to give the host school a formidable 16-1 advantage.

Galet and Nicole Ortlieb finished with two goals apiece for the Bulldogs in the losing effort, while goalkeeper Laurel Maunder made four saves in the first half before yielding to Natalie Chaffin with 5:57 to go following a strike by Aztec sophomore Morgan Taylor.

“Our main focus was doing the little things well and not dwelling on the pressure of playing a conference tournament on our home field,” said SDSU head coach Kylee White. “We had a great week of practice and we were really fired up to play tonight. Our team really believed in what they were doing and kept running throughout the game.

“I didn’t think the margin would be as big as it was; I thought it would be battle until the end. But I had confidence in our ability to get the job done.”

San Diego State will compete for the first conference game in program history on Sunday, April 29, when it squares off against UC Davis in the MPSF title game, beginning at 1 p.m.  Cash only tickets may be purchased for $5 on game day, while links to live stats and streaming video will be available on GoAztecs.com.

Follow @ECMagSports for live updates starting at 1 PM on Sunday.