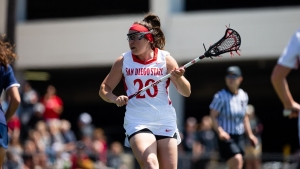 With the victory, the second-seeded Aztecs (10-7) will square off against tournament host and top seed UC Davis (9-7) for the conference title on Sunday, April 28, at 1 p.m. SDSU defeated the Aggies in the MPSF championship final last year in an 11-10 overtime thriller at Aztec Lacrosse Field. However, the Aztecs will be looking to avenge a 16-12 setback at UCD during the 2019 regular season on April 13.

Thanks to her offensive production, Steele becomes San Diego State’s single-season leader with 49 goals on the year thus far and is just four tallies shy of becoming the second 100-goal scorer in program history behind Meris Walsh, who posted 105 from 2012-14.

In addition to Steele and Greenlaw’s output, the Aztecs received a personal-best four goals from Lexi Tan, while Jill Haight dished out two assists. The Scarlet and Black’s fortunes were also bolstered by Bailey Brown, who notched six draw controls for the third game in a row, while Marissa MacRae caused a pair of turnovers, helping San Diego State improve to 9-1 all-time vs. the Bulldogs (7-7).

In front of the net, goalkeeper Katy Sharretts completed her seventh game of the year with double-digit saves, recording 16 stops on the evening to go with a team-high three ground balls. She now has a conference-leading 42 ground balls on the year to move into second place on SDSU’s single-season list.

The Aztecs were kept off the board for nearly the first 11 minutes of the contest, as the Bulldogs nursed a 1-0 lead following Ryleigh Bone’s eight-meter conversion with 5:36 elapsed in the first period. However, SDSU finally broke through with five consecutive goals over a span of nearly four minutes, capped by Tan’s goal off a pass from Julia Sheehan with 15:24 left in the half.

The momentum gradually shifted towards the opposing side, as Fresno State crafted a 7-2 run over the remainder of the period. Jordyn Pandolfo scored two goals during that stretch and assisted on another, while Tiffiny Wallace found of the back of the net with 1:53 on the clock to give the Bulldogs an 8-7 edge by intermission.

That lead would prove to be short-lived, however, as Steele hit pay dirt just 64 seconds into the second half, sparking a crucial 9-3 surge for the Aztecs. By the time Tan connected on a free position shot at the 7:39 mark, San Diego State was in complete control, 16-11.  Steele and Tan scored three goals apiece during that stretch, while Brown, Greenlaw and Jones added single markers.

The Aztecs eventually increased their advantage to 18-12 thanks to Greenlaw two straight unassisted goals just over two minutes apart before Fresno State closed with three consecutive tallies over the final 2:24, which ultimately proved too little too late.

The Bulldogs were paced by Bone and Kayla Galet, who each registered a hat trick, while Sydney Skalstad added two goals of her own to go with a game-high nine draw controls. Wallace and Hannah Krats finished with a pair tallies as well, while Olivia Mannon collected a game-high four ground balls. In front of the cage, goalkeeper Laurel Maunder came up 13 saves before yielding to Courtney Marburger with 7:39 left in the game.

Sunday’s MPSF title game at UC Davis will include links to live stats and subscription video available on GoAztecs.com.