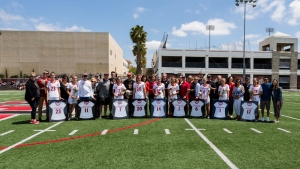 Trailing 10-4 with 9:30 left in the first half, SDSU stormed back with a 12-3 run over a span of nearly 28 minutes through intermission and survived a tying shot attempt in the waning seconds to clinch the No. 2 seed in the MPSF tournament next weekend in Davis, Calif., where the Aztecs and Bulldogs will meet for a rematch in the semifinals on Friday, April 26, starting at 5 p.m. PT.

Superlative performances abounded for the Scarlet and Black, as Steele recorded a career-high 10 draw controls, which ranks second on the school’s single-game charts, while Haight dished out a personal-best four assists to go with a season-high seven draw controls. In addition, the SDSU cause was bolstered by Shannon Gallagher, who matched her collegiate best with three caused turnovers, while Jenny Buckland collected four ground balls to equal her career high.

Elsewhere, Bailey Brown tied her season best with six draw controls of her own and caused a pair of turnovers, while Marissa MacRae finished with two ground balls and two caused turnovers as well.

Fresno State grabbed the early momentum with a pair of five-goal leads, including a 7-2 spread with 16:23 remaining in the first half following Tiffiny Wallace’s second marker of the contest. SDSU responded with a pair of goals just 34 seconds apart, one by Morgan Taylor and another by Tan, which trimmed the margin to 7-4 by the 13-minute mark.

However, the Bulldogs seemingly put themselves in control with a 3-0 spurt over the next 3:29, as Jordyn Pandolfo, Hannah Krats and Ryleigh Bone each found the back of the net.

Undaunted, the Aztecs methodically clawed back into contention thanks to consecutive goals by five different players, including one by Peel with just three seconds remaining in the half. SDSU struck first in the second period as well, with as Jones threaded a pass to Haight, who in full stride beat Fresno State goalkeeper Laurel Maunder, narrowing the gap to 10-9 with 25:35 left.

The Bulldogs reclaimed a 12-10 advantage on goals by Marina Mayo and Pandolfo, sandwiched around a Steele tally, before the Aztecs countered with a 3-0 surge to take their first lead of the afternoon at 13-12. Jones hit pay dirt after a feed from Haight, who converted a free position attempt just 25 seconds later at the 20:15 mark, while Tan buried a shot into the cage two-and-a-half minutes later.

After Mayo connected on an eight-meter shot to tie the game with 16:18 to go, SDSU scored three straight goals to vault in front for good. First, Courtney Robinson found daylight from the free position, while Peel and Steele followed with tallies to close out the scoring for the host school, giving the Aztecs a 16-13 lead by the 10:57 mark.

Fresno State made things interesting down the stretch with a pair of goals by Mayo and Lauren Kiszely just under two minutes apart, with the latter pulling the visitors to within 16-15 as the clock showed 3:30 left on the scoreboard.

The Bulldogs had one final chance to send the game into overtime; however, SDSU goalkeeper made the last of her nine saves in crunch time, denying Mayo’s last-ditch shot, while Buckland scooped up the loose ball with five seconds to go. After an Aztec timeout, Steele fittingly ran out the remaining time as the home bench erupted in jubilation.

Fresno State was paced by Mayo, who led all players with five goals, while Pandolfo finished with a hat trick of her own. Not to be outdone, Maunder came up with 20 saves on the afternoon, marking the top figure in the MPSF this season.

“The key to the comeback, I think, was trusting the process,” said SDSU head coach Kylee White. “We were very connected on every ground ball and we finally got clicking on offense. We had a lot more energy today from the sidelines to the players on the field and that made the difference. It had been a long time since we felt confident in our game. Even if we had lost, we just needed to start playing our game and get our energy back because we haven’t had a good game in quite some time. It was great to have Jill (Haight) back on the draw, too, and I think everyone was just hyper-focused in the center circle. Like I said, our energy was key for us today and we need to be able to bring that same intensity with us when we play them again next week.”

San Diego State will face Fresno State once again in the semifinals of the MPSF Tournament on Friday, April 26 on the campus of UC Davis. Opening draw is set for 5 p.m. If the Aztecs emerge victorious, they will play the host Aggies in the championship final on Sunday, April 28, starting at 1 p.m.