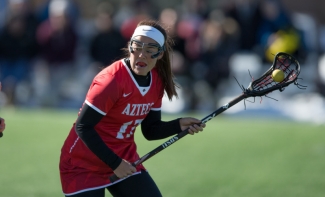 The Aztecs (8-4) rallied to tie the match on two occasions in the second half, including a 10-10 deadlock on Morgan Taylor’s goal with 5:41 left. However, the Scarlet and Black was unable to gain the upper hand, as the Blue Hens (5-5) netted the eventual game-winner less than a minute later on Maggie McCarthy’s strike at the 4:45 mark.

With the defeat, SDSU had its six-game victory streak in one-goal games dating back to last year halted. In addition, the Aztecs dropped their first contest of the year when scoring the first goal (7-1), as Julia Sheehan’s tally with five minutes elapsed gave the visitors an early lead.

Individually, San Diego State was paced by Harlowe Steele, who recorded her third straight hat trick to go with a game-high five draw controls, while Jill Haight added two markers of her own. The Aztecs also received sizable contribution from Taylor and Elizabeth Rourke, who finished with three points (1g, 2a) apiece, while goalkeeper Katy Sharretts matched her personal-best with 14 saves for the second straight outing and fourth time this season.

Still, the Aztecs forged a 5-3 advantage after posting three straight goals by Steele, Ryli Quinn and Haight during a five-minute stretch midway through the first half.

However, SDSU was uncharacteristically held scoreless over the next 28 minutes, as the Blue Hens surged ahead on five consecutive strikes to build an 8-5 advantage by the 20:12 mark of the second half.

The Aztecs finally ended their drought seven-and-a half minutes later when Taylor Sullivan found the back of the net, while Rourke soon followed with a goal to trim the margin to 8-7 with just under 11 minutes remaining.

After Mia DeRuggerio’s unassisted tally at the 8:14 mark restored Delaware’s two-goal advantage, SDSU fought back with scores by Steele and Haight to forge a 9-9 tie with 7:24 remaining.

The Blue Hens countered with Megan Santoleri’s goal shortly thereafter, only to have the Aztecs tie the game once again on Taylor’s aforementioned strike.

SDSU had three chances down the stretch following Delaware’s go-ahead score. Marissa MacRae’s shot at the 4:18 mark was saved by keeper Taylor Carpentier, while two other opportunities resulted in turnovers.

Neither side capitalized on their free position shots, with the Aztecs going 0-for-6 on the day, compared to Delaware’s 1-for-5 clip.