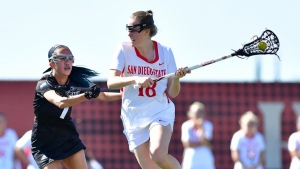 April 4, 2019 (Stanford) - Despite Harlowe Steele’s five points on four goals and one assist, the San Diego State lacrosse team lost its fourth in row on Thursday after falling to No. 18 Stanford by an 18-9 count inside Laird Q. Cagan Stadium.

The Aztecs (8-5) were held to single digits for the second straight outing, as the Cardinal broke open a tight game with a 6-0 run in the first half to seize control.

In addition to Steele’s production, which included three draw controls to tie for team-high honors, SDSU received two goals and a trio of draws from Caitlin Jones, while Taylor Sullivan finished with two scores of her own. The Aztec cause was also buoyed by Marissa MacRae (1g) and Jenny Buckland, who set career-highs with four ground balls each, matching goalkeeper Katy Sharretts, who totaled six saves on the afternoon.

Trailing 4-2 following Sullivan’s goal at the 20:41 mark of the first half, SDSU had a chance to cut the deficit to one after gaining possession on Jones’ subsequent draw control. However, Stanford goalkeeper Trudie Grattan came up with a huge save on Kirstie Greenlaw’s shot just 27 seconds later.

After an exchange of turnovers, the Cardinal’s Katherine Gjertsen found the back of the net with just under 19 minutes left to ignite a 6-0 blitz over the next 5:50 that provided the host school a 10-2 cushion.

The Aztecs ended their drought on MacRae’s goal with 13:07 to go; however, Stanford (9-4) responded with three consecutive tallies by Jacie Lemos, Areta Buness and Mikaela Watson to increase its advantage to 13-3 by the 8:57 mark.

SDSU kept the Cardinal off the scoreboard for most of the remaining time, as Steele and Jones both converted free position attempts nearly five minutes apart. However, with the clock winding down, Gabby Noto threaded a pass from the endline to Lemos, who flicked a shot past Sharretts with just two seconds left to give the contest its 14-5 score at intermission.

Stanford tacked on four more goals in the second half, including two by Ali Baiocco, to build an insurmountable 18-5 lead by the 13:06 mark.

SDSU closed out the scoring with four markers down the stretch, including two by Steele in the final 2:23 to account for the 18-9 score.

The Cardinal were paced by Biaocco and Watson (1 assist), who tied Steele for game-high honors with four goals each, while Lemos completed a hat trick of her own. In addition, Julia Massero led all players with five draw controls and collected four ground balls, while Kyra Pelton (3 caused turnovers) and Daniella McMahon scooped up four ground balls as well.

Collectively, the two sides totaled 25 ground balls each; however, Stanford maintained a 17-12 advantage in draw controls and outshot the Aztecs 28-25, including a 24-18 spread on goal.