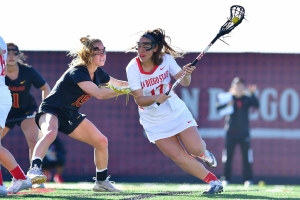 April 17, 2019 (Tempe) - San Diego State was unable to put the brakes on a lengthy losing streak Wednesday, falling for the sixth game in a row with a 13-11 defeat to Arizona State in a non-conference clash at Sun Devil Lacrosse Stadium.

With the loss, the Aztecs completed an 0-6 road swing, dropping to 8-7 on the year, while the Sun Devils move to 6-10 overall.

Individually, Harlowe Steele continued her tremendous campaign for SDSU, tying for game-high honors with four goals, which gives her 41 on the year. With her performance, the Aztec tri-captain becomes just the third player in program history to surpass the 40-goal mark in program history after Meris Walsh (47, 2012) and Bailey Ewing (46, 2013). In addition, the midfielder has scored at least three goals in 17 different games during her career, including nine this season.

Also aiding the SDSU were Kirstie Greenlaw and Lexi Tan, who contributed two tallies apiece, while Bailey Brown led all players with a season-high six draw controls. Anchoring the Aztec defense was goalkeeper, who made 12 saves, caused three turnovers and collected three ground balls, while Marissa MacRae and Morgan Taylor picked up a trio of ground balls each.

However, San Diego State never led in the contest and was forced to rally from a 5-1 deficit after ASU’s Maria Villanti scored the second of her two goal with 19:24 remaining in the first half.

Unfazed, the Aztecs responded with a 6-2 spurt of their own over the ensuing 16 minutes and change, eventually tying the score at 7-7 by the 3:20 mark following Julia Sheehan’s unassisted goal. Tan sparked the run with a free position conversion, while Steele and Greenlaw added two strikes apiece, giving the visitors some much-needed momentum.

Less than a minute later, the Sun Devils went ahead for good, though, as Emily Glagolev’s tally ignited a 4-0 surge through the halftime break. During that span, Kylie Kroeger, Taylor Carson and Carley Adams each found the back of the net, with Glagolev assisting on the latter two goals, which provided the host school an 11-7 advantage by the 21:15 mark of the second half.

However, the game turned into a defensive struggle by this juncture, with the teams combining for just 27 shots after intermission.

The Aztecs responded with a 3-1 spurt to narrow the gap to 12-10, but chewed up over 14 minutes in the process. Steele registered a pair of goals during that stretch, while Tan hit pay dirt after a corralling a Sheehan pass with 6:31 to go in the contest.

Following Glagolev’s free position goal with 5:14 remaining, SDSU trimmed the margin to two once again at 13-11 when Courtney Robinson tickled the twine just 25 seconds later. However, ASU won the ensuing draw and chewed up valuable time, while Paige McGlothlin caused a key turnover after the Aztecs gained possession with three minutes left.

Although the two teams had 25 shots on goal apiece, SDSU converted just 3-of-10 free position opportunities, while the Sun Devils maintained the statistical edge in shots draw controls (15-11) and ground balls (21-18).