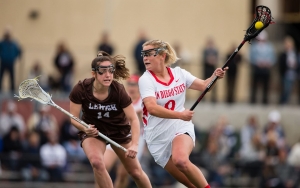 SDSU set season highs in goals scored and assists (11) to move to 7-1 on the year and secure the best eight-game start in program history.

Individually, the Aztecs had four players finish with four points on the night, including Harlowe Steele and Taylor Sullivan, who each recorded three goals and one assist, while Kirstie Greenlaw got into the act with two scores and two helpers of her own. Julia Sheehan also deposited a ball into the cage and dished out a career-high three assists, while Courtney Robinson netted a hat trick as well.

In addition, SDSU received two goals apiece from Jill Haight and Arielle Shahrabani, as 11 different players found the back of the net to help the  Scarlet and Black win its fifth in a row and fourth straight at home.

The Bison (1-6) drew first blood with just over two minutes elapsed on a strike by Morgan Steinhacker before the Aztecs responded with five straight tallies to take the lead for good. Greenlaw keyed the run with two goals and assisted on Sheehan’s marker to give the host school a 5-1 advantage by the 23:57 mark.

Bucknell scored twice in a two-minute span sandwiched around a goal by Natalie Peel to temporarily defuse SDSU’s momentum. However, the Aztecs responded with another 5-0 surge over a nine-minute stretch to build an 11-3 cushion by the 5:42 mark.

The Bison tried to make a game of it, fashioning a 3-1 run on goals by Lillie Hunt, Tace Sutherland and Audrey Walsh, which cut the margin to 12-6 with 1:35 remaining. However, the visitors would draw no closer, as Greenlaw assisted on Lexi Tan’s goal with 22 seconds left to ignite a 6-0 blitz through intermission that put the contest out of reach. Six different players scored goals during that span, capped by Robinson’s free position conversion with 12:34 to go in the second half.

Bucknell was shut out in the period until Julia Bradbury broke the drought with a strike at the 10:28 mark, which proved too little too late. With both teams sending in their reserves, SDSU closed out its productive evening with goals by Shahrabani and Robinson over the final 5:49.

As a team, the Aztecs maintained a 38-27 advantage in shots, including a 26-20 spread in shots on goal. In addition, SDSU maintained the upper-hand in draw controls (17-12) and ground balls (20-17) and converted on 4-of-8 free position shots. The Scarlet and Black also had its transition game clicking with a spotless 16-for-16 effort on clear attempts.

Not to be outdone, Grace McGinty paced the Aztecs with four draw controls, while Natalie Peel tied her career high with three ground balls. Additionally, goalkeeper Katy Sharretts made nine saves before giving way to Amanda Stapp, who had three stops over the final 13:38.

Bucknell was led by Walsh’s two goals, while Eve Calabria had two assists in the loss.

“We came out ready to play,” said SDSU head coach Kylee White. “We’re feeding off the energy of each game, and the focus tonight was to keep improving on the little things, the passing and the catching and limiting our turnovers. We started subbing in early and the play never dropped. I was very proud of the way everyone gave it their all and helped contribute to the win. It was fun to watch.

“There’s always things to work on like communication and making sure we’re all on the right page. But we know if we have the right mindset and the right energy, that’s going to help keep us in games as the season progresses.”

San Diego State closes out its six-game homestand on Saturday, March 16 when it welcomes LIU Brooklyn to The Mesa. Opening draw is set for 1 p.m.