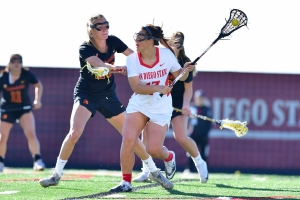 The Bearcats (4-5) never trailed in the contest, limiting the Aztecs to a season-low three goals in the first half to snap the visitors’ six-game winning streak.

SDSU (8-2) was paced by Harlowe Steele’s four-goal performance, while Taylor Sullivan finished with four points on two goals and two assists. Lexi Tan also got into the act with two tallies of her own, while Jill Haight, Bailey Brown and Courtney Robinson each found the back of the net as well.

Collectively, the Aztecs owned an 18-12 advantage in draw controls, including four apiece by Steele, Brown, Haight and Grace McGinty, who also topped the squad with three caused turnovers.

However, SDSU was unable to capitalize on its free position opportunities, converting just 8 of 18 attempts, including a 5-for-12 clip in the second half.

Trailing 3-0 through the first 10 minutes of the game, the Aztecs pulled to within 3-2 on a pair of free position goals just 90 seconds apart but could draw no closer.

The Bearcats responded with a 4-1 spurt over the final 15 minutes off a low-scoring first half, including a pair of free position conversions by Alyssa Adams, while Monica Borzillo and Sam Mlkvy also hit pay dirt to put the host school up 7-3 by intermission. SDSU’s lone tally during that stretch occurredat the 8:36 mark when Steele found daylight on another eight-meter attempt.

Steele duplicated the feat just 46 seconds elapsed in the second half; however, Cincinnati fashioned a 6-1 run over the next 12:35, saddling the Aztecs with a 13-5 deficit.

Two quick free position goals just under a minute apart by Steele and Haight trimmed the margin to 13-7, but the Bearcats gave themselves some additional breathing room with three straight scores by Amanda Donovan, Borzillo and Jayde Sains to boost their advantage to 16-7 by the 12-minute mark.

The Aztecs almost made a game of it, notching four straight goals over a nearly three-minute stretch, including two by Tan, to narrow the gap to 16-11. However, SDSU was kept off the scoreboard over the final 7:43, as Donovan’s strike with 1:05 provided the contest with its final outcome.

Borzillo and Adams tied the Aztecs’ Steele for game-high honors with four goals apiece, while Kylie Nause had three scores of her own.

In addition, Bearcat goalkeeper Giuliana Durso made 10 saves and picked up seven ground balls, while her SDSU counterpart Katy Sharretts had eight stops on the night.

San Diego State close out its weekend excursion to the Buckeye State on Sunday, March 24 when it faces Ohio State at Jesse Owens Memorial Stadium in Columbus. Opening draw is set for noon ET/9 a.m. PT.