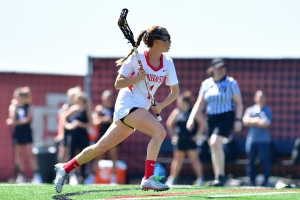 March 30, 2019 (Harrisonburg, Va.) - The San Diego State lacrosse team was unable to dig itself out of deep hole in the first half at defending national champion and 10th-ranked James Madison, dropping a 19-8 decision on Saturday at Sentara Park.

The Dukes (8-3) took charge early, scoring 11 straight goals over the first 11:40 of the contest to help snap a two-game losing streak and send the Aztecs to their third consecutive defeat, all on the road.

Additionally, the Dukes converted 5-of-8 free position attempts, while the Aztecs came up empty on their three tries.

Halle Duenkel paced JMU with a career-high four goals, including three during its first-half blitz. Lizzy Fox also got into the act with a hat trick, featuring back-to-back strikes that put the host school up 11-0 by the 18:20 mark of the opening period.

SDSU finally broke its scoring drought when Steele connected with Sheehan, who deposited the ball into the net with 16:47 remaining before intermission. In the interim, Sullivan hit pay dirt on two occasions, with the second coming off an assist from Jill Haight.

Trailing 13-3 at the break, the Aztecs scored the first goal of the second half on Steele’s goal off a feed from Jones with 2:28 elapsed. However, the Scarlet and Black could draw no closer despite limiting JMU to six goals in the period.

In addition to Duenkel and Fox’s production, the Dukes received two goals each from Logan Brennan, Hanna Haven and Katie Checkosky, while Maddie McDaniel led all players with 12 draw controls.

San Diego State continues its road swing next week when it travels to the Bay Area to face No. 20 Stanford on Thursday, April 4 starting at 4:00 p.m.