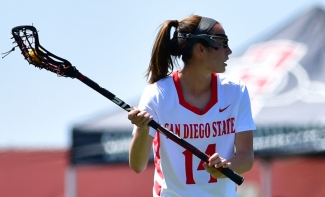 Photo:  Jill Haight led the Aztecs with four points on three goals and one assist on Saturday at No. 20 Notre Dame.  Courtesy goaztecs.com

The Aztecs (9-8) were held scoreless over a 33-minute span through halftime, as the Fighting Irish seized the momentum with a 9-0 surge during that stretch to break a 2-2 tie.

Statistically, Notre Dame (9-8) maintained the advantage in most categories, including shots (38-19), shots on goal (29-13), ground balls (23-13) and draw controls (15-9) to help secure its victory. In addition, SDSU was plagued by 18 turnovers on the afternoon, including 13 in the first half alone.

Individually, the Aztecs were led by Jill Haight, who matched her season-high with four points on a trio of free-position goals and one assist, while Elizabeth Rourke, Taylor Sullivan, Morgan Taylor and Natalie Peel contributed single markers each.

In addition, goalkeeper Katy Sharretts logged her ninth game of the year with double-digit saves, turning away 13 shots on Saturday while equaling her season-best with three ground balls and two caused turnovers. Bailey Brown also got into the act with a team-high four draw controls, while Mackenzie Lech topped the squad with three caused turnovers of her own.

SDSU lost for just the third time this year when scoring the first goal (8-3), as Rourke found the back of the net off a pass from Julia Sheehan to give the visitors a 1-0 lead with four minutes elapsed in the first half.

The Irish responded with a strike by Savannah Buchanan just over a minute later, while Maddie Howe soon followed with a tally to put the host school in front 2-1 by the 22:32 mark.

Haight scored the first of her three goals on the next possession, before the Aztecs experienced a prolonged drought that lasted well into the second half.

In the interim, Notre Dame methodically took control with a 9-0 run to build a formidable 11-2 advantage by the 19:07 mark of the second period. Jessi Masinko and Molly Cobb keyed the spurt with two goals apiece, while Howe added a strike and assisted on another.

SDSU finally broke out of its scoring slump with goals by Taylor and Haight nearly three minutes apart. However, Masinko soon followed with consecutive tallies to put the game essentially out of reach at 15-4 with just under 12 minutes remaining in the contest.

Masinko led all players with five goals on the day, while Howe (2 assists) completed a hat trick of her own, In addition, Andie Aldave finished with a game-high seven draw controls to go with three caused turnovers, while goalkeeper Samantha Giacolone made five saves before giving way to Bridget Deehan with 8:25 to go in the game.

San Diego State plays host to the Mountain Pacific Sports Federation Championships next weekend at Aztec Lacrosse Field. SDSU will face either UC Davis or Fresno State in the semifinal on Friday, April 27 starting at 5 p.m.The championship final is set for Sunday, April 29, beginning at 1 p.m.